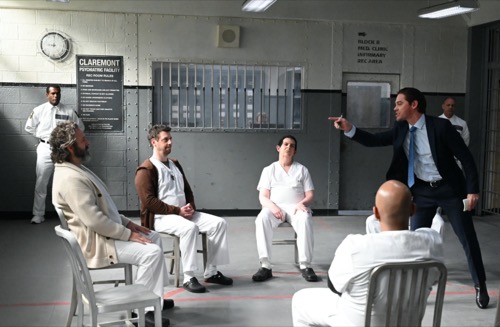 Tonight on FOX their new crime franchise Prodigal Son airs with an all-new Tuesday, February 2, 2021, episode and we have your Prodigal Son recap below.  On tonight’s Prodigal Son season 2 episode 4 called, “Take Your Father To Work Day,” as per the FOX synopsis, “Martin is delighted when a murder at Claremont Psychiatric brings the NYPD into his territory, allowing him direct involvement with one of Malcolm’s cases.

While working the same job, Ainsley’s suspicion grows when she feels Malcolm may be hiding something from her. All the while, Malcolm and Ainsley must dodge their mother, who’s wondering why they got rid of her favorite rug”

In tonight’s episode Martin has woken up, he is enjoying his breakfast and then heads to his therapy group. He says he once was lost, but now he is lost. Gerry says he is getting released, he feels really grateful, he is finally on the right meds. Gerry says he had no idea how much he needed to be out of that place, to be alive, he is going to be free. Martin tells him that he is very happy for him.

Malcolm is at home with his mother, Hanz is there, he found Jessica a new carpet. Malcolm recounts how the carpet got stained with wine, well not the entire truth.

Martin is outside playing basket when Gerry falls to the ground, he is dead. Looks like he jumped from the roof. Gil shows up to investigate and asks Martin why he did it. Martin says he is a witness and saw him land, but not jump, but he has a few thoughts. Gil says he will take nothing he says into consideration. Martin says Gerry didn’t kill himself, he was in therapy with him and he was so excited for his freedom, a man like that doesn’t go and kill himself.

Gil says no he doesn’t. Edrisa says three of his fingernails are bent back and there are surface abrasions too, all before he landed on the ground, so she is not going to declare this a suicide. Edrisa starts talking to Martin and Gil reminds her that he killed twenty-three people.

Malcolm tells Ainsley he did his best, but Jessica was in interrogate mode, so be careful. Ainsley says she doesn’t remember anything so it is easy. He tells her it was a traumatic experience and she should just forget it. Malcolm tells her that he will let her in on this case, if she stops talking about that night and she promises not to see dad.

She reluctantly says ok. Gil calls Malcolm, says there has been a murder at Claremont and his father is a witness. Martin shouts in the background that he can’t wait to work with him and Ainsley is thrilled and says YES.

Ainsley is packing up her purse and Jessica walks in and says she found the perfect rug for the living room, Ainsley has a flash back and drops some papers, then she leaves.

Edrisa has Gerry’s body in the morgue, Malcolm is there and she says that set of bruises on his shoulders, he was shoved back before he was killed. Looks like it was a fight, someone was angry with him. Martin is on Edrisa’s phone and says it is obvious this was an inside job. Martin says he saw it all, clear as day. Everybody in that therapy session looked positively murderous when Gerry bragged about leaving.

Gil and Malcolm go see Martin who says he wants to be a peer. Martin say she really wants to help them, but he doesn’t like these dynamics one bit, he wants to be part of the team. Gil says ok. Martin tells them that three of the people in the group session had acute stress responses, Hector, Bert and Fire Pete. Gil says he will go speak to them, Martin says good luck with that, they won’t talk but if they were to include him, well then they might talk.

They call the group together, Martin is there and so is Malcolm. Hector tells Malcolm that he is crazier than him. Malcolm says he is there to catch a killer, Martin laughs. Hector tells Malcolm he is cold, calling the cops on his own old man. Dr. Marsh tells them to talk about Gerry. The talk goes back again about Martin and Malcolm who says his father destroyed him as he stands up and shouts it out in front of everyone. Malcolm sits down and says he is sorry, maybe is a bad idea. Dr. Marsh says they should take a break.

Hector tells Malcolm, if he wants to catch Gerry’s killer, asks how did he get on the roof, did he have a key card with him. Malcolm says no. Martin asks Dr. Marsh if he has a card, maybe Dr. Marsh was upset that Gerry couldn’t stand the place anymore. Malcolm asks Dr. Marsh to show him what kind of key card he has, it is a gold one, that has access to everywhere.

Dani and Gil have Dr. Marsh in for questioning, they ask him why he got his new card an hour ago, they were told he lost the old one. Gil says it is odd, because his key card accessed multiple locations that morning. Gil tells Dr. Marsh that he is lying. Dr. Marsh says he hasn’t had a successful patient outcome in years. Gerry’s release was his chance to show that his therapy does work.

He says they don’t know what it is like in there, he is a prisoner in there too. Malcolm heads out and sees Ainsley, he says he doesn’t think they found their killer. Then she tells him she remembers something about that night, blood, he says she tried to save him. He tells her that he will talk to her later, he has to go speak to Martin.

Dr. Marsh said he gave his key to Gerry so he could say goodbye to some people. Malcolm tells Martin that Ainsley has started to remember things about that night. Just then Dani walks in and tells them that Gerry used a gold key to enter the fourth floor library just before he was killed. Marsh was telling the truth. Martin says the fourth floor is ward z, the woman’s ward.

Malcolm and Dani visit the woman’s ward and they meet with a guard named Andre. Malcolm sees some scratch marks on the wall, the color is the same as what was found under Gerry’s nails. Andre says the cleaning crew has access to the library, they comprise of four women. All but Carla are lifers, she is being let out next month. Malcolm asks if anyone of them are strong, he says Marianna, she is strong. Rhonda and Ming are the other two, they are averaged size ladies. Martin said that Gerry couldn’t stop talking about lobster, but he is from Kentucky. Rhonda is from Maine.

Jessica calls Martin and asks him if he dropped a bottle of wine months ago, would he remember the exact vintage. She thinks it is a cover story. She tells him the night of the carpet incident, it was then night that Nicolas Endicott disappeared. He tells her to ask a question if she wants to. She says she can’t. He laughs at her and says he can’t believe that she thinks their kids killed the guy and hid his body. Then before ending the call, he says the apple doesn’t fall that far from the tree. Ainsley is there to visit Martin, he says it has been too long.

Malcolm goes to see Rhonda, she is in her room and says he is there to talk about Gerry, he knows this is hard. She says he was good to her, real good and this is all her fault. She did nothing, she should have done more, he was scared. He was afraid of another inmate who wanted to escape and Gerry wouldn’t help. The inmate, they call him the surgeon.

Malcolm goes to see Martin and finds Ainsley is there. Malcolm says Martin killed Gerry. Ainsley leaves. Martin says wow, this family, everyone is on a hunt for the truth. Malcolm says he spoke to Rhonda, she told him everything. Martin wanted to escape and Gerry wouldn’t help him. Malcolm says he could have manipulated someone to do it, he doesn’t care who he lies to or hurts. Martin says if he was the cold blooded psycho he says he is, he would hate him because he ruined him and his mother. And, he wouldn’t kill Gerry because Malcolm is good at this and wouldn’t come back. Martin says celebrities are easy to blame, it is the burden of flame.

Gil goes to see Dr. Marsh and finds out that Rhonda had another boyfriend and it wasn’t Gerry, it was the guard Andre. Dr. Marsh tells him to watch out for the explosive rage from Rhonda. Just then, we see Rhonda beat Andre with her head, she grabs his keys and she is gone. Alarms are going off, Malcolm and Martin are in the elevator and the power goes off in the elevator and they end up in the basement. They hear noises, Malcolm tells Martin to stay there, Martin tells him to grab a wrench that is nearby. Malcolm goes looking for Rhonda.

All of a sudden, Rhonda hits Malcolm with a taser and he is thrown to the ground. He tells her to stop, he is the surgeon’s son and he is down there too. We see Martin, he grabbed a jacket and found the gold key, Dani is also in the basement. Martin sees Dani, but shouts out to Rhonda not to hurt Malcolm. Rhonda tells Martin it is his turn.

Martin tells Malcolm he is sorry, he was trying to solve a case with him and he didn’t want it to end. Rhonda asks what he is talking about. Malcolm tries to kick the taser out of Rhonda’s hand, Martin comes close and Rhonda threatens to taser Martin in the head. Just then, Dani comes around the corner and saves the day. Martin puts the cuffs back on Martin and takes the gold key.

Later, Jessica is at dinner with Malcolm, and laughs that she thought he killed Nicholas Endicott. Then she spent the afternoon tearing the place apart to find evidence. And, she found nothing. He says of course she didn’t. Then she tells him, she found it, he missed a spot. She tells her that he killed him. She says it was Ainsley, wasn’t it. Meanwhile, Ainslie is reading some notes of Martin. Malcolm tells Jessica that Ainsley doesn’t know, she doesn’t remember anything and she can’t tell her, they might lose her.