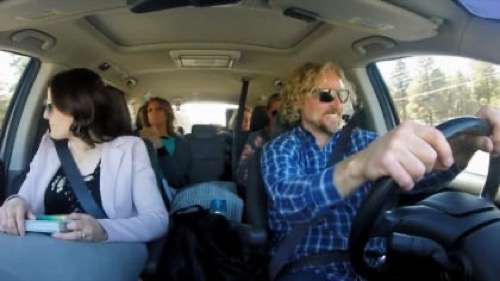 TLC’s reality show about a polygamist family Sister Wives returns tonight with an all-new Sunday, February 21, 2020, season 15 episode 2 called “Felons No More,” and we have your weekly Sister Wives recap below. On tonight’s Sister Wives season 15 episode 2 as per the TLC synopsis, “The Browns visit their polygamist friends to discuss the sudden and exciting possibility that polygamy will be decriminalized in Utah. The car trip to get there is a mess, but once there, the excitement is palpable.”

In tonight’s episode of Sister Wives Kody is meeting with his wives at Mary’s house about a trip they want to take to Utah to meet another family in a plural marriage. Janelle says that within day that they went public, the police came on to them and they worried they were going to be arrested in Utah. They left the state in the middle of the night and they sued the state of Utah.

Kody calls Christine because she is working in Phoenix. Kody says he has to come back quickly from the trip because he has to work. Christine doesn’t want to go, she things it is ridiculous to drive all that way to speak to someone. Kody can’t stand the way people in Utah think about paligamy. Robyn says it is more the worry about teenage brides. Kody says he is glad they didn’t move to St. George now. Kody asks the women if they would go back to Utah if it were just like a parking ticket that they would get. Robyn doesn’t like the question, she is happy in Flagstaff.

Christine on the other hand would love to go back to Utah, it is home and she hasn’t adjusted well in Flagstaff. Robyn says it would be so amazing to choose Utah, but who knows how or if it would work. Christine says there is no reason to talk about it until the law changes. Kody wants them all to drive together in the same vehicle. Robyn thinks it could be a lot of fun or very uncomfortable. Meri thinks there is a value of spending time together.

The next day, Kody is trying to pack his things in the car. Christine tells him that based on luggage they are taking two cards, Kody doesn’t want to hear it. Christine says if he brought less stuff they could put another person in the car, everyone else packed light. There is a flat, Kody says he is going right to the tire place. Christine tells him that if they want to take this trip, they are taking another car. Kody says no way, she just wants to take two cars, she knows they all can’t fit into one of their cars.

Kody is full freak-out mode, he keeps shouting that the tired is flat. Meri wishes she had flown. Kody tells them to all be patient and not micromanage him. Christine doesn’t think this trip is starting well. Kody says this fun, travelling with a bunch of bossy women. They arrive at the dealership, the tire is getting fixed and Robyn tells him that she doesn’t understand why they don’t take her minivan. The dealership tells them the tired is ruined and they don’t have another one in stock, he suggests that they take another vehicle. Christina says maybe they should just call Joe and avoid the trip; Kody just gets more annoyed.

Janelle is worried about going back to Utah in case they get pulled over for a traffic ticket, and the cops use that to get them for polygamy. They arrive in Utah, the van handled fine. They had some good conversations in the van. They arrive at the Darger’s house, they still have nine children at home. Robyn starts feeling uncomfortable because Kody starts talking about having one more kid and he never discussed it with Robyn and she is the only one that can still have kids. Meri wishes that Kody had more friends that are polygamists, she can see that it is good for him.

The Darger’s live under one roof, Joe says he just wants his own bedroom; Kody gives him a fist pump. Kody says their biggest problem is that they don’t know other polygamist families in Flagstaff. Meri says that they are acting more like four individual families now in Flagstaff.

Kody tells the Darger’s that he has talked to the wives about a common home, he has always that if you were one family you should be on one home. Robyn says that if they are all united though, it won’t work. Christine just hates the hole idea. Valerie says she has lived alone, and together, there are pros and cons to each. Meri says with their family, when there are issues they don’t deal with them, because they don’t live with each other. Joe thinks the cons are petty if you compare them to the pros.

Robyn says she feels like a step mom now that they are not in one house. Joe says they are just talking about their experience and they don’t want to influence them either way, they just know what works for them. Kody says he feels like he has done a poor job because his family doesn’t want to live under one roof. He doesn’t know what the answer is, or what he has missed. Joe feels that since the Browns left Utah, they have lost a sense of community.

In Utah right now, polygamy is a felon. Kody could go to jail for nine to twelve years. And, calling another woman your sister wife is a felon. Joe says the bill is call SP102, it has passed the senate and not the house. If it passes it will be an infraction and not a felony. Christine’s grandfather told everyone to come out and talk about being in a plural marriage, unfortunately the timing wasn’t right and the law passed, his family had to separate.