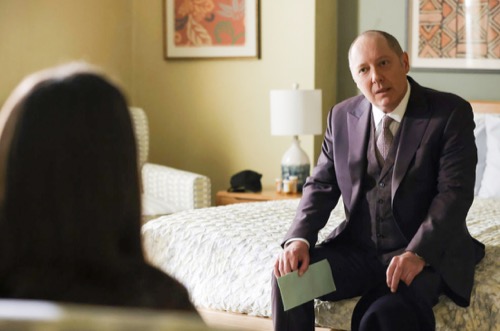 Tonight on NBC their hit drama The Blacklist starring James Spader airs with an all-new Friday, June 23, 2021, finale episode and we have your The Blacklist recap below. On tonight’s The Blacklist Season 8, Episode 22 called, “Konets”,  as per the NBC synopsis, “Reddington makes a disturbing request to Liz in exchange for the truth about his identity.”

In tonight’s The Blacklist finale episode, the episode begins with the aftermath of the blast, Dembe is the first to emerge from the cellar, then Red and Liz. Townsend is dead. The three make it to the plane, a doctor is on board, Liz is going to be fine from the gunshot wound. Red tells Dembe to call Dr. Clemons and thank him for his services, but they are no longer necessary. Red is giving up. Red says there is another fight to be won, it can’t be won unless he is gone. He tells Dembe that he will have a drink and toast to better days.

Liz is with Dembe, he tells her that sometimes he blames Red too but fate and destiny drive their lives. All of a sudden, Agnes comes running into the room and runs to her mom.

Dembe and Red arrive to see Cooper, Aram is there with balloons and hilariously breathes in some of that helium and asks the two if they want a toke. The balloons are for agent Ressler.

Red and Dembe arrive in Cooper’s office and the two have taken in some of that helium as well and Cooper says he thought Aram was the only man child. Red says they are there to bring dark tidings, Townsend’s death is about to create firestone of criminal activity. In the absence of a successor, everyone will be buying for the position. Red tells Cooper that he is the end. Cooper says he knows he is sick, but how bad is it, how sick is he. Red won’t answer, he just wants Cooper’s promise that he will do everything he can to help Liz. Red and Dembe leave, Dembe says his bloodwork came back and the treatment is working. Red says he is dying anyway, what he has doesn’t go away.

Red is back with Liz, she thanks him for bringing Agnes there for her – she is at the park with her nanny. Red brings up the conversation about who he is and how he came into her life. He says to her mother, the answers are in a letter that she wrote to her, for when the time is right so she can know the truth. Red says one condition, he asks her to take his life. He tells her that he is drying, he is sick, before he dies, he needs to make sure she is protected. He wants her to kill him to show the world that she is a force to be reckoned with, she found and executed Raymond Reddington. Townsend learned certain things about them, and other people probably know as well, he is afraid others will come after her. She will need strength to take care of herself, this is a way to get it.

Liz goes to the park to pick up Agnes who asks where pinky is, she calls Red pinky. Red is back at the apartment listening to jazz. Liz plans on taking Agnes and going to Europe. Dembe and Red are sitting together reminiscing.

Liz picks up Cooper, she tells him that Red asked her to take over for him, she said no, she is leaving. She says she is getting away, but she wanted to tell him in person. Cooper tells her that there is so much that he wants for her, but first and foremost, he wants her safe. He tells her that if she takes over for Red he can probably get her immunity and they could work together. Her not doing it concerns her more. She asks about Ressler and says that she wants to see him. He tells her to call, but she says there is no fun in that.

Liz sneaks into the hospital, puts on a doctor’s jacket, and sneaks into Ressler’s room. He tells her that she is too good to do what Cooper wants her to do, she is not a criminal, and pretending to be one is not going to make her safe.

Cooper tells Aram and Park that Red wants Liz to take over, he is sick and it is terminal. If she decides to take over for Red, she is going to need their help. Meanwhile, Liz is at the train station and Riker’s daughter is there, she recognizes her. Liz tells her that she left the Bureau, her train comes, but before she leaves she tells Liz that she makes the world a better place. Liz calls Dembe, she tells him that she wants to talk to Red and listen to his proposal. Liz is on her way to New York with Agnes.

Liz meets Red in a park, they sit down and talk. She says if she does this, what makes him think it is going to work, her as his heir, how are people going to accept that. He says he wonders if it is his presence that brought her to this crossroads, or maybe none of that mattered and she was born to this, a daughter of a spy. He says he has thought and thought about and he just doesn’t know. What he does know is that whether it is chance, karma, DNA, fate, or mad luck, this is where she is now, this is who she has become, a criminal, a fugitive.

Taking his life is a way forward. She asks him how it would work. He says the restaurant has been under renovation, tomorrow night there will be a celebration with friends, by 1 am things will be winding down. He will say his goodbyes, she will wait down the street, it will happen on the sidewalk and quite fast. When the police arrive she will be long gone. The next day, a photo of her standing over his body and kill him will be leaked all over the news around the world. She says as many times as she wanted to kill him, she doesn’t think she can pull the trigger. He tells her not to think about it, let them just be, he holds her hand and they walk in the park.

Agnes sees the two and runs to Liz for a hug, Red smiles. They continue through the park, Red smiling and watching Agnes. Liz asks Red who was he to her mother, why did he make the promise to keep her safe. He says he knew her well, better than anyone. She says she will do it. Red says ok. She says in exchange she wants an answer to a question, he said she can’t see her mother’s letter and know who he is until he is gone, why. He says if she knows who is beforehand, she will never kill him.

Liz calls Aram, he tells her they may have a lead to the criminals who want to replace Townsend. She tells him that she hopes he can find it in his heart to forgive her for what she has done and for what she has to do. She hangs up him. Aram then tells Cooper that Liz asked for his forgiveness.

Red is sitting with Dembe, he says what they built has been fulfilling, a wonder, a blessing, challenging, and a curse. It has become who he is, but at some point, it became clear to him that he is not in control of this. No matter how much he tries, or cares, or gives of himself, he has no control over how this ends and that is crushing, so he doesn’t think about it. Dembe understands. Red gives Dembe the letter and tells him to give it to her only when he is gone. Red asks Dembe if he is ready, he says no, Red says him neither – they go.

Liz calls Agnes who says she sounds sad. Liz says that someone she knows is sick, he is going to die, so she is sad. Liz tells her that her friend is trying to be brave, he knows he lived a good life, he has a lot of friends who love him. Meanwhile, Red tells Dembe to let him out of the car, he wants to walk to the restaurant – Dembe cautions him that it is not safe, but Red goes anyway. Liz tells Agnes that no matter what happens, she loves her to the moon and back – one more sleep and she will see her in the morning.

Ressler is on the phone with Cooper, he tells her that if Liz is going to take over Red’s world she is going to have to make a statement. Cooper guesses that Liz is going to kill Red to show that she is no longer an agent and is taking over his empire. Cooper figures out that the party at the restaurant must be where it is going to go down. Cooper tries to call Red while Ressler leaves the hospital. Red’s friends are all enjoying dinner, toasting Red.

Ressler is running, the best he can towards the restaurant. Red gets up, takes his hat, gives Dembe an endearing hug. Park and Cooper are seen arriving with backup near the restaurant. Redheads out, Dembe has the letter in his hands. Red opens the door, steps outside, puts on his hat. Liz gets out of her car and follows him, he turns around, she lifts her gun, she is crying and says she can’t do it. Red tells her it is all right.

All of a sudden, Liz is shot, Vandyke is behind her and he shoots. Red takes out his gun and shoots Vandyke several times. As Liz is dying, she sees her life flash between her eyes, Red is holding her. Dembe arrives, he tells Red he has to go. Dembe pulls Red off Liz. Ressler arrives, he finds Liz on the ground, Park, Cooper, and Aram are there as well.