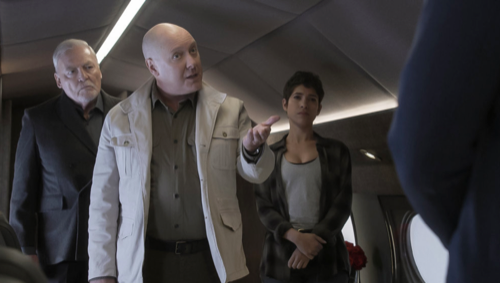 Tonight on NBC their hit drama The Blacklist starring James Spader airs with an all-new Thursday, November 4, 2021, episode and we have your The Blacklist recap below. On tonight’s The Blacklist Season 9, Episode 3 called, “The SPK”,  as per the NBC synopsis, “A new case involving stolen artifacts reunites Red with a former blacklister. Aram faces a difficult decision.”

In tonight’s The Blacklist, episode begins in Prato Cathedral in Italy. A man walks up the alter and tells the bishop that he is sorry he is late, but there was a crowd outside. The bishop explains that the Sacra Cintola is a treasure and only on rare days do they put it on display, everyone wants a peek. Unbeknownst to them, some gunmen have entered the cathedral and knocked out the security guard. The armed men break their way into the chapel, grab the artifact, shoot another guard and take off with the artifact as the bishop says it is not worth their lives.

Aram is home with his parents, they talk about his being with the team, he says he likes being back with them. Elsewhere, Red is with Cooper having coffee when he tells him that he wants to be in Agnes’ life. Red then asks him if he has heard of this religious (SPK) knighthood, Cooper never heard of them. Red says for generations they have been rather toothless religious extremists, they recently killed an innocent man in the Sacra Cintola (also known as Mary’s holy belt, two thousand years old) another in the list of stolen artifacts that will be put to auction. Red tells him to some looking into the SPK.

Cooper meets with the task force about the belt, he tells them that the new leader of the SPK is a man called Giovanni. Ressler is there and he is having a hard time accepting Dembe who is there as well. Aram reveals that he may have found an investor for his company, so he may leave the task force soon.

Aram and Dembe go to the cathedral, Dembe figures out that the first guard was involved because his gun was still holstered.

Park and Ressler go to see a man named David regarding a financial transaction he made, he wired fifty thousand dollars to a man in Italy, the guard at the cathedral. David says he has no information about any criminal activity and has no idea what they are talking about. Ressler mentions SPK, the man hits Ressler with a shovel and runs into a storage shed. Ressler knocks down the door of the shed and David has set himself on fire.

Red is at the auction, up next is the Sacra CIntola, the bidding starts at two million. Red buys is for five million. When Red sits down to pay it, he tells the auctioneer, Trevor, that he has no interest in the belt, he just wants to know the name of the client who gave it to him. Red wants him to arrange a meeting, and he is not leaving there without it.

In the hospital, David is wrapped up and recovering from his burns, Ressler and Park are speaking to his wife. She says the knighthood happened to him, she thought it would be good for him, she didn’t know it was cult. Her husband’s behavior changed and she started tracking his cell phone some time ago.

We see the SPK in action at one of their meetings. Giovanni tells his followers that death and violence are not the way to righteous change. He warns them no more violence. He says they should all be like John the Baptiste and their next target is the head of John the Baptiste. It is going to be at the old Holy Cross church tomorrow afternoon. He tells them to take a breather and when he returns he will tell them how he plans to steal the head.

Trevor arranges the meeting for Red, who walks into a room and Giovanni is there, Red says things just got interesting, calls him Robert Vesco. Red orders two of the most expensive bottles of wine that are fifty-eight hundred dollars each, on Giovanni’s tab, Red then says to Giovanni to tell him about his scam.

Robert tells Red that he never uses violence, but he should have been there to make sure his boys were in check. Red tells him that he should stop, Robert says he will once he steals the head. Red tells him they have unfinished business, the deal Cruz job and Red wants him to pay his debt. Red tells him he believes in karma, even if it is a bitch.

Ressler and Aram are taking urine samples for the FBI, it is a protocol to get back into the task force. Aram gets a phone call, he got his investor and it is exciting.

The task force gather and talk about the case, Ressler and Dembe found a legion hall that might be the place where the SPK meet, based on David’s cell phone that his wife tracked. Dembe sees a mirror, he tells Ressler it is actually a door and presses a button on the top, it opens. They find the room where the SPK meets, there is a projection screen and went Ressler turns it on, a photo of the head comes on, there is also a map of the church. Ressler hears a noise and he finds one of Giovanni’s men lying on the ground, he was hit on the head with a wrench because he didn’t want to follow along with some of the other men who wanted to bomb the church.

Red and Robert are on a private plane on their way to Malta to get the money that Robert owes Red when he tells Red that if he forgets about the money, he will let him in on something that is worth ten times that much. Cooper calls Red and tells him that he was able to secure supervised visits for him with Agnes, he also tells him the SPK’s next move. Red hangs up and tells Robert that he said he had his flock under control but they are about to blow up a church on live TV. Robert says he can’t bear to have on his soul a church full of innocent people dying.

Park narrows down who Giovanni is, he goes and tells Dembe that Red conned them, Dembe says that is not the case.

Red brings Robert to the church, he tells him to go inside and tell his flock to deactivate the bomb. He kisses him on the lips, reminds him who he is, and tells him to go in there and put his game face on. Then Red tells him that if he tries to run out on him again he will put him down like a three-legged mule.

Robert goes inside but too late, his flock finds out on the police scanner who he really is because the FBI put out APB for him. Red takes matters into his own hands when he finds out about the APB, he goes into the church. Red tells them that Robert aka Giovanni doesn’t destroy the relics as they thought, he sells them. To prove what Red says, he pulls out the case with Mary’s belt and shows it to them, then Red calls himself the God of death. Meanwhile, inside the church, Dembe and Aram are trying to find the bomb.

Ressler’s urine test came back as a diluted negative, Park tells him that he has to take it again, under closer supervision and he needs to clean himself up.

Aram tells Cooper that they did good work today at the church, they saved a lot of people. Aram tells him that he had his business partner by him out, his mother will get the church she wants, he wants to stay with the task force, he can’t think of anywhere he would want to be.

Red tells Cooper that he doesn’t think they have seen the last of Robert, maybe if he gets bored he will break him out. Cooper tells him that he going to go get Agnes, he has waited two years there is no sense in making him wait any longer. Agnes comes into the room, Cooper introduces Red as a close friend of her mother’s. Agnes remembers him, she calls him Pinky.