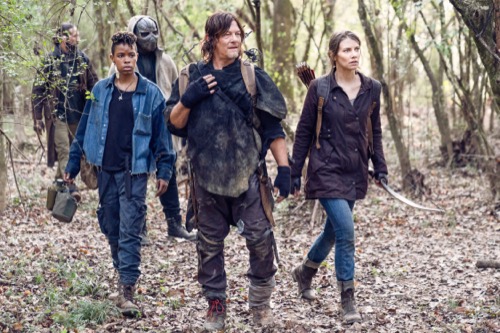 Tonight on AMC our favorite show The Walking Dead airs on an all-new Sunday, February 28, 2020, episode and we have your The Walking Dead recap below. On tonight’s The Walking Dead Season 10 Episode 17 Winter Premiere called, “Home Sweet Home,” as per the AMC synopsis, “Maggie returns, to the dismay of Negan; the trials she endured since leaving have made her harder in order for her and her son to survive; Daryl and Maggie unexpectedly fight an unseen and unknown threat.”

In tonight’s The Walking Dead winter premiere episode we see Maggie, she kills a walker and is traveling on foot with Judith. Negan sees her and says hell, then tells her that he didn’t escape if that is what she is thinking. Negan says, oh shit, as Maggie walks away angry.

We see Daryl and Carol, she tells him that Gabriel and Rosie just left with the first group. Maggie walks up, two people walk up and Maggie tells them they are her people. She introduces Elijah and Cole to Carol and Daryl. She and Hershel were living with them and their people. Carol hears something, they go out to the pasture where the water tower is. Carol tells Maggie that Negan was with the Whisperers that night, she wanted her to hear it from her.

Carol tells her that she let Negan out, Alpha needed to die, they were going to lose everything and Negan is the reason they didn’t. Daryl tells her that they are still trying to figure things out. Maggie says she needs to get to Hershel and the others, Daryl tells Carol that he will go with her and try to smooth things over.

Kelly asks Daryl to go with him, he says yes. They are all walking and after some time, decide they can’t go any further because it is almost dark and it won’t be safe. Daryl says they should go up in the woods and find higher ground, Maggie disagrees, she wants to find shelter. To get to shelter there are a lot of walkers to kill, Maggie storms into an area and the rest follow her to clear it out.

The group are in a shelter for the evening, Daryl tells Maggie it is all clear. Then, he tells her he is happy that she is there. Maggie got a cut on her wrist. She tells him that Georgie had such good ideas, they would find groups and try to help but it would always go sideways. She says Georgia went to check out a place and where Maggie was, the place fell, she hasn’t seen her since.

After Knoxville, they took a detour, they went to a place near the ocean, a place where she and Glen talked about going, they never did. But she thought Hershel could and he loved it. Waves twice his size knocked him to the ground and he just laughed. They watched the sunrise and it was so peaceful.

He asks her how his daddy died, she knew it was coming. She told him that a bad man killed him. He wanted to know if that man got what he deserved, he wanted to know if that man is dead. Truth is, she left town because she couldn’t have any more thoughts of Negan in her head. Daryl tells her that she could return home. Then he says Carol felt she had to do what she did to save everyone.

It is morning, Maggie wakes everyone up. A few walkers get through the area, Cole says to Daryl, isn’t your friend supposed to be on the watch. Then we see Kelly she is walking around a truck, knocking on it, and looks inside to see if anyone is there. She goes climb inside, and Maggie grabs her foot and tells her that she cannot go off like that. Daryl explains to Maggie that her sister is missing. Josiah goes up to the top of the truck and looks to see if anyone is there, they find a coat and Maggie tells her that Josiah recently lost his sister too. Kelly tells Maggie that she just had to check.

Daryl is inside the burned structure looking for clues. He continues outside, he says they scattered and headed north. Hershel is the only kid in the group. They head out and follow the tracks, Maggie says anyone gets in their way, they kill them. The trail splits and Daryl lost Hershel’s tracks. Maggie says they should split up, they will have a better chance of finding them. Josiah, Cole, and Kelly go one way, Daryl and Maggie the other. Kelly sees something out there, she tells Cole Josiah that they have to move.

Then, she asks him to remove his mask, he does and he looks scared. She tells him it’s a lot, but he is not alone. They all hear the noise this time. Daryl finds someone and puts a knife to her neck, but Maggie stops him and says she is one of them. There are a few more around, one girl tells Maggie that Jenna and Billy didn’t make it, and something in the woods took out Maddie. Hershel is out there as well. All of a sudden, one of the men with them gets something shot into his neck. They make a run for it, someone is shooting at them.

Maggie and Daryl hear someone else being shot, it is a woman and she was shot in the stomach. Daryl says it is a trap, they are trying to take them out one by one. Maya goes to check on the girl how got shot, she gets shot as well. Maggie thinks Maya saw Hershel. Daryl tells Maggie there is only one shooter, after three shots he reloaded. All of a sudden, Maggie is attacked, the person is camouflaged. Maggie tries to fight, but she is trapped. Daryl attacks the guy and he throws Daryl five feet in the air, this guy is big.

We see this big guy, take off his hat and camouflage. Maggie and Daryl are still alive, Maggie has freed herself. Daryl as well, he got a knife. Kelly shoots the guy in the chest with an arrow. Maggie asks him why he did this, they did nothing to him. She asks him who he is, what does he call himself. He drops his knife and smiles, he has a grenade and pulls the ring. Maggie tells everyone to get down.

Hershel is ok, he was hiding in a tree, Maggie and Daryl smile when they see him. Hershel looks like a mini Glen. The group is in the shelter, Elijah brings fruit to Kelly. Maggie is sitting beside Kelly and asks who is older, her or her sister. Kelly says her sister Connie and always kept an eye on her even though she had her own life. Daryl tells Maggie that they will stay there a few more days, make sure the guy was alone. Maggie says she is returning to Alexandria, Hershel deserves a home, she will deal with Negan if she has to.

The next day, the group heads out again and arrives to find Carol and the rest rebuilding. Cole asks her if this is home sweet home, she says yes.