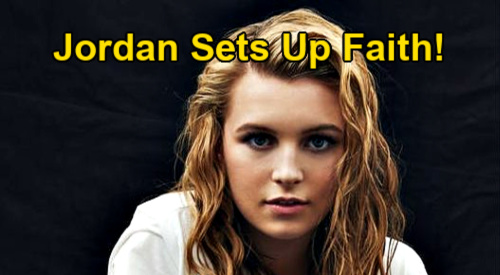 The Young and the Restless (Y&R) spoilers tease that Sharon Rosales (Sharon Case) will add to her list of problems during the week of February 15-19. After Sharon gets swept up in a sizzling kiss with Adam Newman (Mark Grossman), she’ll push her former flame to stay away from her.

Sharon will hope she can get rid of temptation by shoving Adam out of her life.

Nick, Sharon and Nikki Newman (Melody Thomas Scott) have been working hard to help Faith get back on track, but she’s fighting them every step of the way.

Unfortunately, a disturbing call will soon alert Sharon to more trouble. Sharon will hear from someone at Walnut Grove, so she’ll have to brace for bad news.

The Young and the Restless spoilers say Sharon will reel when she finds out Faith has been suspended from school. It turns out Faith will get caught with vodka in her locker, so the principal will slap Faith with a suspension for having alcohol on the premises.

Naturally, Sharon will pass along updates to Nick, who’ll be equally worried about Faith’s apparent drinking problem. Things will really be getting out of hand from Nick and Sharon’s perspective, so they’ll corner Faith and demand answers.

Faith will unleash her wrath since she feels like Sharon and Nick always assume the worst of her. The Young and the Restless spoilers say Faith will insist she’s innocent.

Faith will come clean about the severity of the bullying she’s endured and blame the suspension on her tormentors. Faith will insist she’s become a target and was set up.

Nick and Sharon may wonder if that’s the truth, but it’s actually a reasonable explanation this time around. Why would Faith take the risk of hiding vodka in her locker?

And isn’t it awfully suspicious that Faith’s locker will be searched? It certainly sounds like someone, likely Jordan (Madison Thompson), planted the vodka and then alerted someone on staff – knowing that Faith would get busted.

Jordan may be the bullying ringleader now that Sharon has essentially banned her from seeing Faith. Jordan is obviously the type who could turn on Faith, so this may be a vengeful move on her part.

It looks like Jordan may also be behind the text that’ll be sent to Faith later. That text will contain a photo of Adam and Sharon’s kiss that was taken at Society. It’ll leave Faith fuming, so there’ll be plenty of drama in store for Sharon and her daughter in the week ahead.