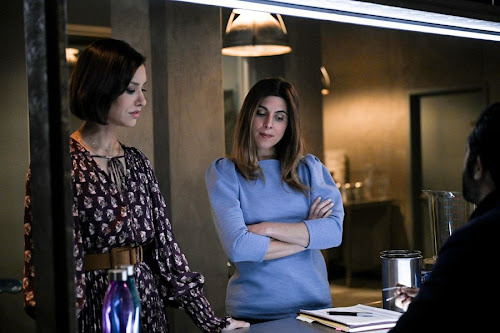 Tonight on ABC their new thriller by David E. Kelley, Big Sky airs with an all-new Thursday, March 24, 2022 episode and we have your Big Sky recap below. In tonight’s Big Sky season 2 episode 13 ‘The Shipping News,’ as per the ABC synopsis,“The kids may be free from the trouble they caused, but the Bhullars’ reign continues as Jenny finds herself frustratingly stuck one step behind their crew’s every move and Travis struggles to maintain the balancing act of his two lives.

Elsewhere, Cassie reels from her final interaction with Ronald and decides to take some time off; meanwhile, the syndicate bares its teeth at Wolf.”

Tonight’s Big Sky episode begins with Jenny who goes to see Cassie in the ambulance. Jenny tells her Mark is going to be fine, Phoebe and Scarlett are gone and as soon as they question Wolf they will get more information. Cassie says she is tired.

In the ambulance, a representative of the syndicate Is there and he says he is there to tidy up his mess, they want to know where Scarlett is. Wolf says he doesn’t know. The guy says he is lucky, the bullet missed all his vital organs. He would have survived, John Milton sends his regards. He puts a plastic bag over Wolf’s face and suffocates him to death.

Max and her mom are coming out of a medical center when Max’s friends are there to see her, her mother tells her to go ahead. They all realize it is never going to be the same. Max hugs them all before she leaves. Harper tells her not to be a stranger, Max kisses her and they end up holding hands and Harper goes with Max to go with her mother who is waiting for her.

Jag and Ren are going over the product together. Stone walks in and he has Ren’s money, she tells her him gets a gold star and a smiley face, she gives him to packets of money. Then she tells him that the first shipment is almost done and he can make sure along with Dunno that everything goes off well.

Jenny is with Tubb, he reminds her who her new partner is, and it is not Cassie.

Jenny meets up with Poppernak they are searching a building, when they go downstairs to the basement, Bob’s dummy is there and Jenny thinks something is not right. All of a sudden, she sees a watch with a timer on the dummy, she yells bomb but two of the officers get blown to the floor and Poppernak is in pretty bad shape.

Dietrich goes to the motel to see Stone, he tells him that Veer Bhullar reached out and wants to talk. Stone says he thinks it’s a trap.

Stone finds Jenny crying, she tells him that Bob rigged the place, killed two deputies and Poppernak is in the hospital.

Dietrich has his meeting with Veer, Jag is there. Dietrich says they have always had a good relationship and he hopes they can get back to that. Veer says they are not equals, he is giving him one last chance to grasp this. Veer tells Jag to get up and hit Dietrich, it’s a test. Jag hits him twice, and his father yells and tells him to put Dietrich on the ground or he will make sure it is done to him.

Jag does it, Dietrich hits the floor after an intense beating.

Sonya has her drivers ready, she tells them that Dunno is going to give them one parcel each. They hide it with their legitimate car bill, then they wait to make a side trip indicated in envelopes that she hands them. They ask why two of them, she says to split the risk.

Jenny goes to see Poppernak in the hospital, he says he has cracked ribs and maybe a concussion, he will be out of there as soon as they say his head is ok. He tells her that she got lucky. She tells him that ATF is taking over the case but she promises him that she is going to get this guy. He feels bad, nobody to have her back while he is in the hospital. Then he tells her to watch her back with Travis, she says noted. He thanks her.

Jag walks into the office, Ren tells him that she doesn’t trust Alicia, she is not like dad’s other girlfriends. She wants to know why their dad wants to suddenly leave Canada. Jag yells at her and tells her to leave it alone. She sees his bloodied hands and he says he did what dad told him to do, she should be grateful she wasn’t there.

Sonya is following one of the drivers, Jamieson, when he pulls over because there is a flaming horse on the highway. He gets out and Bob is there, he shoots him dead, turns to Sonya and tells her that she gets to live.

Jenny and Tubb are on the scene, they see Jamieson dead and his truck is gone.

Jenny tells Stone Bob highjacked a truck and killed the driver, his prints were on the shell casing at the crime scene. Jenny and Stone go to see Dietrich, to see if he is involved. Jenny tells him to call her if Bob reaches out. They leave and Bob walks in, he asks Dietrich if they are friends again. He says no, but he is sick of people telling him what to do.

Ren and Jag are having dinner with their dad and his girlfriend. Ren says they lost a shipment, but they will find it. Ren asks her dad why they are pulling out of Canada. He says he sees a good idea, things change. Ren tries to insist, but he tells her to eat.

Stone and Jenny tell Tubb they think Bob will reach out to Dietrich. He asks him why he hasn’t got the Bhullar out of his town.

Dietrich turned in Bob, Dunno and Jeg’s henchman bring him to Tanya and Ren. They have a bath of acid and are discussing how they are going to kill him. Bob makes a last ditch effort to save himself, he tells Ren that Stone is a cop. Ren calls Stone and asks him to drop by the house. When he gets there, Ren asks him if he is a cop and he stabs Bob in the neck to prove to her that he is not.