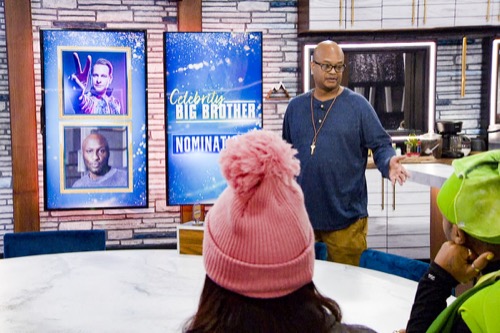 Tonight on CBS Celebrity Big Brother US 2022 airs with an all-new Sunday, February 18, 2022, episode and we have your Celebrity Big Brother US  2022 recap below! On tonights CBBUS3 season 3 episode 11 called, “PoV and Live Eviction,” as per the CBS synopsis, “Tonight on Big Brother we have a PoV completion and both Lamar and Miesha will be fighting to take themselves off the block.  Following the PoV we will have a live eviction and another houseguest will be going home.”

Tonight’s Celebrity Big Brother episode begins with Carson and Cynthia’s only hope lies in the POV tonight. If Cynthia wins she will take Carson off the block and give the duo another day. Lamar is not the target, he is just Todd’s pawn, but that might change if Carson gets taken off the block because Miesha, Todrick and Todd have a final deal. Todd didn’t put Cynthia on the block because he may need her later on, but if Carson comes off, he plans on replacing him with Cynthia. This is the third time that Carson is on the block and he may just have another trick up his sleeve.

Lamar and Todrick are talking, Lamar says if he had a billion dollars he would put it into cancer research and find out what makes kids die from sids. When he got his son’s death certificate it just said unremarkable. He says the tests that he has gone through has made him stronger. Todrick says so much of Lamar’s story is so inspiring to him and puts things into perspective.

Lamar and Todrick have to go the diary room downstairs, it is time to take off their costumes and both of them couldn’t be happier. As much as they like each other, they just want to get out of their costumes. Carson and Cynthia’s mantra today is “do their best and hope for the best.” Cynthia is a woman of God, she prays every day and called on God a little bit extra to pray that they win the Veto.

Time for the Veto competition, the backyard is made to look like a winter wonderland. In each round three identical objects will appear, a character will go into one of them, shuffle around, the players need to keep track of where the character is at all times. After they stop moving, the players have to identify which one the character is in, A, B or C. Get it right, they get a point. The player to get the most points after seven rounds wins the POV. The challenge is difficult, Todd as an early lead but Miesha creeps up and takes the win. Sadly, Lamar and Carson didn’t have a chance.

Carson and Cynthia have no hope of getting Carson off the block. Meanwhile, Lamar is not worried because he is not the target. Carson and Lamar are exercising, Carson tells Lamar that if they get rid of him he should team up with Cynthia otherwise he won’t be safe for long. Even though Lamar is not strong in game play, there is strength in numbers. Lamar enjoys Cynthia’s company, but he is not sure if this is a strategy for him.

Cynthia tells Todd she can’t believe how good he was at the POV competition. Miesha is annoyed, the competition was hard and she says Lamar was annoying and being a butt head because he kept talking.

Cynthia tells Carson there is an interesting development, Miesha is annoyed with Lamar. Now that Carson hears this, he might go speak to Miesha, this could maybe save him this week.

Cynthia would love to beat Miesha in the house, but with the amount of energy she has when she trains, she knows she has no chance. Carson wants the nominations to stay the same, and for the house to get rid of Lamar. What is bothering Cynthia is why Todd didn’t put her up. She thinks that Todd is worrying about his game and align other people with him. Cynthia thinks they should go to speak to Todrick and Miesha and do a final four with them. Cynthia says this is the time they fight like hell, it is not over until it is over. Time for the Veto ceremony and Meisha had decided not to use the Pov. Caron and Cynthia think this is a good thing. They both plan on speaking to Todrick.

Julie has a guest, Big Brother superfan Jerry O’Connell who says he knows half the people in the house. He says he feels like Todrick is controlling everything. He is not someone who tries to control things, he lets things happens. He loves when Todrick gave Todd the POV. He is so please to see Cynthia really get into the game and want to fight. He was really shocked when Shanna left the house, that was a crazy thing. Jerry thinks that Carson might not get voted out. Jerry would like to see Lamar win the show but that is a long shot, so he will go with Cynthia.

Carson goes to speak to Todrick and says he would like him to vote to keep him here, and both he and Cynthia will guarantee to give him their votes when they get to jury. Carson and Cynthia are clutching at straws, but Todrick is thinking about it. Todrick goes to see Meisha and tells her about what Carson and Cynthia offered, he says there is a part of him that is considering it. Miesha thinks that Todrick is making a good point, but she still wants Carson gone first.

Time for tonight’s elimination, first both Carson and Lamar plead their cases. Miesha is first to go into the diary room, she votes to evict Carson. Cynthia for Lamar, Todrick for Carson. With a vote of two to one, Carson is evicted from the Big Brother house.

Carson is with Julie and she talks about how he could have gotten rid of Miesha, and didn’t. Carson says they trusted Miesha because she played the game with integrity, so they wanted to play with the devil that they knew than someone that they didn’t trust. He regrets not getting rid of Miesha. Carson says he is a little miffed being voted out. Julie tells him that his social game was amazing. Carson hopes that Cynthia can go all the way.

Julie tells the houseguests who won the superbowl, with less than a minute on the clock, Rams won 23 to 20. Then she congratulates them on being the final five. Julie shows the houseguests videos from their loved ones. Julie reveals that it is time for America’s vote, to choose which is their favorite houseguest who will be rewarded with twenty five thousand dollars.