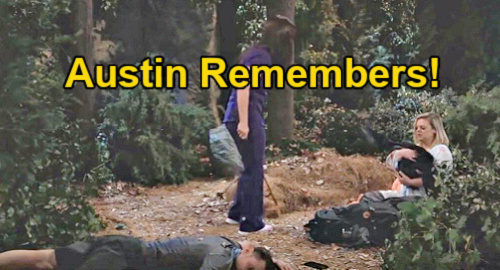 Anna Devane (Finola Hughes) just can’t make sense of this crazy kidnapping situation, so she feels like they should start at the very beginning.

On the January 13 episode, Anna suggested heading back to Pautauk so that Maxie could relive the night of Louise’s birth and see if she could remember something else.

Maxie was OK with that – mostly because she knows for sure what happened to her baby girl.

Maxie was just trying to appease Anna by going through the motions, but Anna’s next suggestion didn’t go over as well.

Anna admitted she also wants Austin to come on this trip since he was there that night.

Anna feels like there’s a chance Austin’s memory could be jogged – and that’s exactly what Maxie’s afraid of.

Austin was unconscious when Maxie handed Louise off to Brook Lynn Quartermaine (Amanda Setton), but he’s already had some strange dreams and vague dialogue memories.

It’s clear that even though Austin was seemingly out of it, he wasn’t so far out of it that he can’t put this puzzle together!

Maxie will be reluctant to take this trip as her fears run away with her.

It won’t take long for Felicia Scorpio (Kristina Wagner) to notice Maxie is on edge, so she’ll question her daughter about why she’s so against going to Pautauk with Austin and Anna.

Maxie will have to dodge questions as best as she can and hope Anna’s plan doesn’t end in disaster.

It appears Maxie and Austin will indeed head back to the woods of Pautauk during the week of January 24-28.

That’s when Maxie will scramble to come up with a believable explanation.

Perhaps Maxie’s worst fears will come true when Austin remembers more than he should.

Will Austin realize Maxie gave her baby to Brook Lynn and determine that the whole kidnapping story has been a lie?

Maxie’s attempt at an alternative explanation may crash and burn, so her new plan may be to plead with Austin to keep her secret.

That could prove difficult with Victor Cassadine (Charles Shaughnessy) sniffing around.

Austin would never intentionally put Maxie’s baby at risk, but that doesn’t mean he won’t slip up and lead Victor straight to her!

There’ll be a lot at stake if Austin becomes privy to what really went down between Brook Lynn and Maxie.

General Hospital spoilers say Maxie’s stress level is about to skyrocket, so stay tuned to see how she copes.

CDL’s where you want to be for terrific General Hospital spoilers, updates and news, so make us your one-stop source!