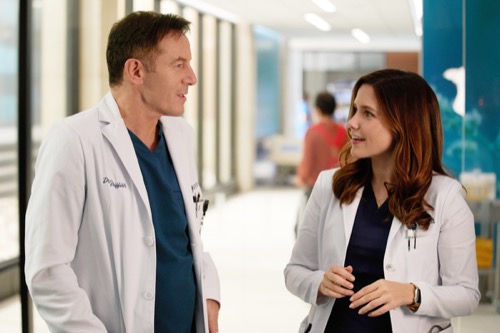 Tonight on CBS their new drama Good Sam about a gifted heart surgeon starring Sophia Bush and Jason Isaacs airs with an all-new Wednesday, January 12, 2022 episode and we have your Good Sam episode below. On tonight’s Good Sam season 1 episode 2 called, “Natural Order,” as per the CBS synopsis, “Dr. Griffith fights to keep her new leadership role as chief of surgery when her father takes his case for reinstatement to the hospital board.

So make sure to bookmark this spot and come back from 10 PM – 11 PM ET for our Good Sam recap. While you wait for the recap make sure to check out all our television recaps, spoilers, news & more, right here!

In tonight’s Good Sam episode, Griff will continue to be proctored. Sam agreed to it. She said that as a doctor she couldn’t afford to let him go, but she was calling it on their relationship as father and daughter. She no longer wants a personal relationship with him. He was a terrible father. He undermines at work. He cheated on her mother. He’s now sleeping with Sam’s best friend. Her father will always choose to be a horrible father. Sam can choose on letting that affect her and her choice is to cut her dad out of her life. She was instead going to focus on the job. And she was doing so when Malcolm Kingsley asked her out to dinner.

Kingsley is a board member. His father is Chairman of the Board for the hospital. He was young, handsome, and rich. He was the perfect guy. He also didn’t know her father before this or defer to him. Something her last boyfriend struggled with. Sam therefore should have jumped at the chance of having dinner with a man like Kingsley. Yet, she hesitated. It was only for a moment and she later agreed to go out with him and then she found herself talking about her dad a lot. It brought down the mood of the first date. Sam quickly realized this and she tried to course correct. She was telling Kingsley how she was going to do better when her father unfortunately ruined the date.

The swanky restaurant where the two potentials were supposed to enjoy fine dining was ruined by the fact that Sam’s father was also at the restaurant. He was actually having dinner with Kingsley’s dad. Whose again, Chairman of the Board. Sam realized that her father was dining with the man in an efforts to get around his proctorship and to steal her job from her and he only did so because she refused to bend on granting him leniency. She treated him like she would with any other doctor. He detests that. He wants to be treated as exceptional. And so that’s why he was trying to cut corners by going to the board.

Sam didn’t confront her father. She instead went back to the office and she researched other doctors who tried to cheat in their proctorship. She wanted to prove that her father would be unfit if he tried to take back his old job. Sam managed to convince the board not to reinstate her father before the proctorship has ruin its course. Only her father convinced them that the moment he does finish with the proctorship that he should be given back his old job as Chief of Surgery. Griff broke the news to Sam. She and the other residents were all left in shock. They remembered the days where Griff ruled and he was a dictator who constantly undermines them.

Sam is a much better leader. She agreed to take a case from pediatrics. Something her father would never have agreed to it and she did it because she was foster unity within the hospital and to give the patients a better experience while there. Sam cares about the patient. She acts with heart. Her father was as cold as ice and its amazing he managed to convince anyone to sleep with him much less marry him. Griff was a horrible person. A great doctor and horrible person. Sam tried to work with her father. She tried to get him to at least follow his proctorship and he was resistant to everything she did or said.

Sam still tried to work him. Even after finding out what he did with the board. She had him in the room along with the residents as she was doing her rounds and unfortunately Griff couldn’t take it. He bluntly told the parents of a sick baby that their child needed a surgery to hook him to a machine. He bluntly told a man with heart problems that he was most likely going to do die of heart failure. Sam tried to take him to task and things got personal. She mentioned him sleeping with Lex and unfortunately the other residents heard her. They all found out that Lex slept with Griff. And so some of the guys began shunning Lex.

Sam tried to apologize to her former best friend. Lex said that they moved past simple apologies. Sam’s two patients began to code. She was rushed into the OR to save the baby. She kicked her father out of the surgery for undermining her and she later had to kick out a nurse as well. Sam saved the baby’s life. She was talking to the family afterwards when she noticed that he baby’s older sister didn’t like wearing her shoes because she was suffering from the same genetic mutation as the brother. Sam realized this around the same time that her brother did. And they knew that geno therapy was the best way forward for the child.

If Griff was still the chief, the head of pediatrics would never have brought the baby to them. The baby’s life was saved because Sam was in charge and so Lex told Sam that’s how she should put it in front of the board. Sam later had the head of the pediatrics call a board meeting. She went to it and she made her case for why she should remain in charge long after her father’s proctorship ends. Sam made a good case. She felt confident after talking. She later called her father a T-rex and she said she was the meteorite. And so he should be concerned about his job because she was coming for him.