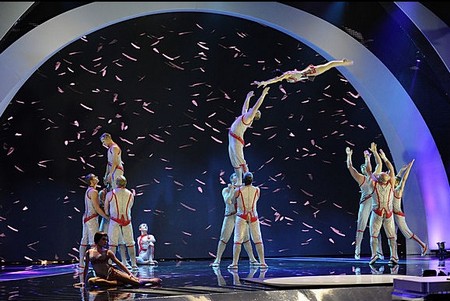 Tonight on NBC is an all new episode of America’s Got Talent. On this week’s show it is the second week of live performances. Judges Howard Stern, Howie Mandel, Sharon Osbourne and Nick Cannon will continued their search for the million-dollar act. Twelve acts will perform, but only four will move on to the next round!

On last week’s show the votes were counted and we learned which performers were moving on!    The four acts moving forward were:  Shanice and Maurice Hayes, The Scott Brothers, David Garibaldi & His CMYK’s and Edon.  Did you watch last week’s episode?  We did and we recapped it here for you!

On the result show tomorrow Gavin DeGraw will be doing a special performance of his new hit single “Sweeter.” Plus, they will have a high-energy performance by the urban circus Traces.

America’s Got Talent had the Nos. 1 and 3 programs for the week ending Sunday, according to Nielsen.  Bringing controversial shock jock Howard Stern into the mix on AGT seems to be helping the ratings but at the same time it is making the other judges seem sadly lacking.  What do you think is Howard breathing new life into AGT?  Hit the comments and let us know your thoughts!

Tonight’s recap: We are live tonight at the New Jersey arts center and the show is starting.  Tonight is the second 1/4 final.  Twelve more acts will be vying for out votes but only 4 acts will go ahead.  Without further ado, lets get started!

LionDanceMe (vote for them at 1-866-602-4801) – the dancing is based on martial arts and the members of the dance team have to trust each other.  The dance is very visual and very dangerous according to Howie.  According to me, ya okay, but come on, give me a break!  People dressed as lions dancing, snoreeeeeeeeeeeeeee!

Judges comments – Howard – congratulates them on not falling because he knows how difficult it is what they do.  What he worries about is week after week it is the same thing.  He loves it, but he thinks America gets bored, they want different and unique.  He gives them a 50/50 chance. Sharon – She is always amazed by their strength and timing, but tells them that maybe some of them should start doing martial arts with the lions.  She tells them they have to do something different.  Howie – Agrees with Howard and Sharon but unlike Howard he did not like it, he was bored.  He didn’t think the performance was different from their last performance and he thinks they are in trouble tonight.  I AGREE!

Judges comments – Sharon – Sharon asks him how it is living in Las Vegas, he has moved there.  Sharon tells him he has guts and talent.  She loves the way he uses the stage, she would like to see more dance.  Howie – Thinks there is so much emotion in what he is.  He cannot figure out how he does it.  He thinks Turf wants it more than any other contestant.  Howie is in awe of him ad thinks he is a human Gumby.  Howard – Turf is Howard’s man – Howard warns Turf not to let everything go to head, he should keep his eye on the competition.

Judges comments –  Howie – He likes the group and that is why they are there.  But that song was too pop and he likes them as a rock band.  He wants to see strictly rock.  Howard – he has been a fan for a long time.  He thinks they are trying to have it all ways, but he does not think they can.  Tonight was the first night he did not want to be up there with them on stage.  He thinks they are in trouble.  Sharon – she loves their strength on stage and their enthusiasm.  But she is not crazy about the song they performed.  It was screaming all the time.  She love the fact they look like a 80’s retro band.  She hopes they come back, they have potential but they have to pick songs better.  Howard gives the last comment and says he does not want them to be a bar band.  NEWS TO HOWARD – they are not even good enough to be a bar band, baddddddddddddddddd, off key, screeching!  blah..

HAWLEY MAGIC – (vote for them at 1-866-602-4804) They are struggling financially and living with their parents.  They have been working their butts off perfecting their illusions.  They intend to go out on the stage tonight and give us everything.

Judges comments – Howard – feels for them, because the best magic act is getting out of their parents basement.  He thought their illusion is strong and he thinks they did a good job.  He hated them in Las Vegas, but loved them tonight.  Sharon – Their presentation bothers her, it is too old school.  She wants them to be cool and young, not old.  Howie – loves them and agrees there has to be something they can do to update their look.   I THOUGHT THEY WERE PRETTY AMAZING!

LISA CLARK DANCERS – (vote for them at 1-866-602-4805)  from California.  Howard thinks they could go through if they give us something special.

Judges comments – Howie – Was waiting for them to step it up.  But tonight it seems like a high school recital.  It does not look like a $1M act.  Sharon – Does not know what is going on tonight.  She did not like the music she thought is was too old school, it was not edgy enough and too cute.   It did not make it for her.  Howard – He thinks they are being a little rough on them.  They are talented, but they are in the most difficult category of all and he does not match up to the other competitors.  He doubts they will go through and he thinks it is unfair to say they look like a dance recital.  I HAVE TO AGREE BLAH….. NOT SURE WHY THEY ARE THERE!

AURORA LIGHT PAINTERS (vote for them at 1-866-602-4806)  Sharon did not think they were ready for AGT but she was outvoted.  Tonight’s concept for the group is Monsters Under the Bed.

Judges comments  – Howie – He thinks they have peeked.  He thinks they were different, that is why they brought them there.  BUT, it is not a 1M $ act.  Howard – He gave them an X – they are special and have worked hard, he feels they have something there.  Problem is you go to see a special effects movie and there is a story.  He was hoping they would have a story, there is too much waiting.  A great special effect with no story.  He does not think they are going ahead, America is not going to understand it.  Sharon – She thinks they a vision, but it is not sophisticated enough.  MY ONLY COMMENT IS, THIS IS SUPPOSE TO BE A TALENT SHOW RIGHT???  WTH WAS THAT…. blah……

Judges comments  – Howard – He was going say she is 14 and she was incredibly memorable tonight and she should be proud.  Sharon – Thinks that her voice does not stop, she has a huge vulnerability and everyone loves her.  She dresses like a 14 year old and it is refreshing.  Howie – Tells her she looks beautiful.  Howie tells her his followers on twitter are saying she is good and he agrees she is outstanding.  HAVE TO AGREE SHE WAS GREAT AND SO FAR ONE OF THE BEST PERFORMERS!

Judges comments  – Sharon – Feels every time they see them they do something different.  She hopes it comes across a home how strong they are.  She really hopes people realize how hard it was, they were seamless.  Howie – He thinks they are great entertainers and the moment Rebecca went up and kissed Donovan it was a moment.  Howard – He feels they are an amazing act.  He loves when Rebecca lifts Donovan.  He gives them a bravo and a well done.  He feels America will put them through!  I AGREE THEY WERE AMAZING AND DAMN SHE IS ABS OF STEAL (I AM TURNING GREEN)

BIG BARRY – (vote for him at 1-866-602-4809) He is the oldest contestant in the group.  He lives in Fort Lauderdale and is loving all the attention he is getting.  Howard does not like him and thinks there is no place for him on his stage.

Judges comments – Howie – He comments if Bob Dylan and Easter Bunny had a baby….  He tells him he is not a good singer, but he is an amazing person and an incredible novelty act.  He feels he is memorable.  Howard – He tells him it is not about him – he tells Howie he has let a lot of people go but Big Barry should not have taken that place.  There were a ton of people who had a lot more people that had more talent than Big Barry.  He tells Howie he owes a lot of performers apologies.  He tells Big Barry he has no talent and it is offensive.  Sharon – She tells him he sings like he is on the toilet.   Howard continues to go on at Howie and demand an apology, which he does not get!!!  I AGREE PUTTING BIG BARRY AHEAD IS REALLY MAKING A JOKE OF THE COMPETITION!

Judges comments – Howard – He thinks Howard is smooth and he is the man to beat.  He knows how to take a crowd in 90 seconds and win them over.  Sharon – she feels his timing is perfection, his jokes are original.  She hopes he is in the finals because he deserves to be there.  Howie – He agrees with everyone – he knows what it feels like – the pressure is tremendous and he never shows it.  He feels he delivers like a true professional.  He hopes he goes through.  HE WAS FUNNY ONE OF THE BETTER PERFORMANCES TONIGHT!

BEN BLAQUE – (vote for him at 1-866-602-4811) Some dude who shoots arrows at his assistants head.  Howie thinks he pushed the envelop last time and wonders how far he is willing to go.

Judges comments – Sharon – She thinks it was very good and everyone was at the end of their seats.  Howard – He has been a big fan since the beginning.   He tells them this is the reason they should not have Big Barry they need acts like them. (what is Howard smoking)  He thinks they are a great act.  Howie – He agrees they are a great act.  (Howie and Howard bickering again)  Howie absolutely loved it!  OKAY SO IT WAS DANGEROUS, BUT MEH……

TIM HOCKENBERRY – (vote for him at 1-866-602-4812) He has struggled with addiction but he went to rehab, he found the girl of his dreams and got his life back on track.  He is a front runner of Howards.

Judges comments – Howie  – Think he looks emotional, he feels his voice is haunting and he is a possible winner of AGT.  He think he is phenomenal.  Sharon – She thinks he sings with such emotion.  She thinks he is amazing and thinks he will be staying.  Howard – He is his favorite singer, but tonight, he feels he fell short, he loved his Joe Cocker better.  He felt his other two performances were better.  He does not feel it was his best performance and hopes he makes it through.

THE END – Only four will make it to the finals, so join us tomorrow for our coverage of the result show!