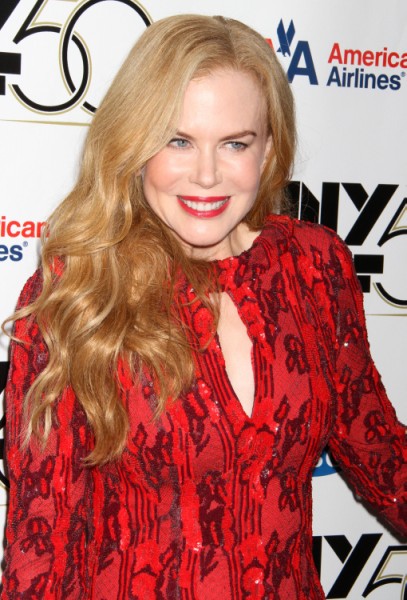 Perhaps I’m just in a conspiracy theory mood today but I can’t stop wondering why Nicole Kidman keeps squawking about Tom Cruise. The last two days have been filled with Cruise talk which is more than she’s talked about him in the last six years. So what’s going on? Is she using his name to sell her new film, The Paperboy? Does she want him back? Or did he ask her to bring him up in a normal, casual way in an effort to convince people he isn’t as crazy as he seems? That’s the one I’m leaning towards.

Let’s revisit what she said first, shall we? A couple days ago she answered if she spoke to Katie Holmes through the divorce. While she was eager to brush back those questions with a quick, “I never spoke to her. I wish all of them well, but I was not involved in any of that” she did reminisce about her time with Tommy. She told Australia’s Who magazine: “When it didn’t work out, I had to really dig deep and find my way through depression But I have no regrets about all of it. It was all a part of growing up. It was a fantastic decade I wish all of the people that have been involved in my life well, because it’s very important to me to be in a place of forgiveness and love I got married really fast and really young. But I don’t regret that because it got me [children] Bella and Connor and I did have a fantastic marriage for a long period.”

So Cruise was a fantastic husband? Katie Holmes definitely isn’t singing that tune. Perhaps she needs ten years and something hanging over her head to get to that point.

But that’s not all. Today, Kidman’s in the headlines again talking about her and Tom’s Eyes Wide Shut director, Stanley Kubrick. Page Six reports Kidman said, “Tom and I went to his house and had dinner, and I remember I was nervous,” she said, adding she was ultimately “able to sit on the floor of his office . . . and be privy to so many things. It was like having a great, great teacher. I remember thinking [he] was frail, and . . . if I were more intuitive I would have realized that he was not well. One of the worst things . . . was, I was going to call him [on Kubrick’s last night alive], and I didn’t. Instead I got a phone call [the next day] saying Stanley was dead. It was one of my great regrets that I didn’t call him that night.”

OK, I might be stretching with this one but she does mention Tom again in a very casual and natural manner. It’s odd to me. Maybe Nicole feels more comfortable talking about Tom now because she’s one ex-wife removed. She can leave the hating to Katie Holmes for awhile. But I wonder if Tom, or maybe even their kids, was like, “Come on Nicole. Mention Tom a few times. Make him seem normal. He needs this!” Because he does, right? He needs Nicole to think back to the good ‘ole days and Cameron Diaz to party with him so people see him as a movie star instead of a Scientology nut job. He’s got too much at stake. His Jack Reacher movie comes out in December and the studios have been worried his image will hurt sales. That means Tom’s got around two months to turn the tide. Staying away from Suri Cruise isn’t helping but Nicole might.

But if you were Nicole, would you talk nice about Tom? He kept her away from her kids, and some even think, allowed them to be turned against her. He divorced her in the blink of an eye. I know that was a long time ago but those were some pretty deep wounds. There were always the rumors that he was able to keep the kids without Katie Holmes-type fighting from Nicole because he had something on her. Does he still have something on her which is why she’s playing ball now? Or am I over-thinking the comments?

Could Nicole Kidman want Tom Cruise back or did Tom just call in a favor and Nicole is too nice (or blackmailed) to say no?