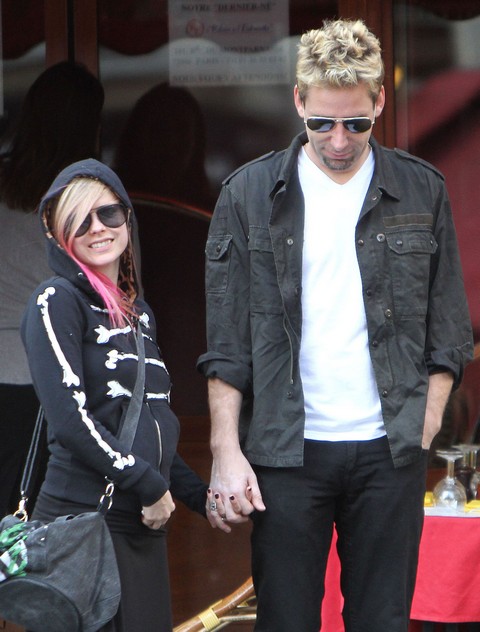 Ever since Avril Lavigne and Chad Kroeger announced their engagement via Hello! Canada magazine, fans of both the musicians asked themselves the same question over and over again – Is this for real??  While their romance seems hard to imagine, ‘tis true indeed folks.  They managed to keep their budding romance a secret for quite some time, having fallen in love while Kroeger (the front man for the famous Canadian band, Nickelback) helped produce some songs on Avril’s (who is also Canadian I might add) upcoming album.

While I found it hard to believe – as they seem an unlikely pair, an inside source of mine confirmed their relationship long before it hit the headlines.  Needless to say, I wasn’t terribly surprised like the rest of you lot.  As it happens, the same source who gave me the inside scoop as to their romantic courtship, is also confirming that the young rocking, pink-haired lass is indeed holding a bun in the oven!

Several pictures have surfaced over the Internet the last couple of months with the normally thin Avril wearing baggy hoodies and jogging pants, suggesting that she’s possible eating for two.  While neither of them have confirmed to the public that this is the case, it could perhaps explain the sudden engagement.

I mean, come on – with the track record for celebrity divorces what it is, can’t celebrities be content just simply dating – without having to go through the messy court battles that comes with divorce?  Unless of course, there’s a wee babe on the way – in which case, rushing to the altar is the norm (unless you’re Jessica Simpson or Angelina Jolie, that is).

Either way, I’m saying it (or rather writing it) here people – expect the stork to come sooner than later, and keep your eyes peeled for further baby bump watches!