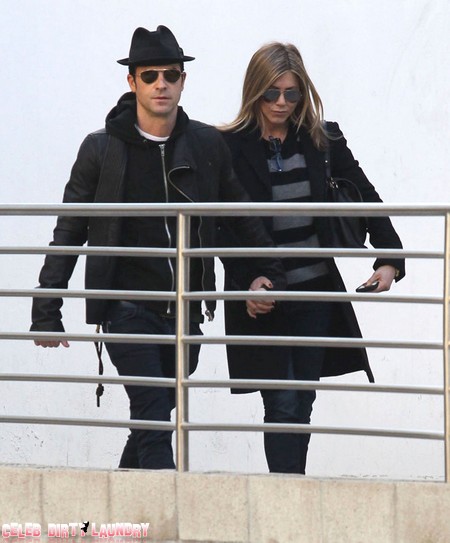 Jennifer Aniston wants a baby and a wedding with Justin Theroux and she is trying to purchase both.  Jennifer has never recovered from having her ex-husband, Brad Pitt, stolen from her by vixen Angelina Jolie.  Brad and Angelina have a lovely family with a bunch of children as well as successful production companies, while Jennifer is still limited to acting in silly romantic comedies.  Now Jennifer is playing catch-up, or we say in economics, she is trying to keep up with the Jolie-Pitts Joneses.

So Jennifer looks at Angelina and sees that she has a beautiful de-facto husband (her ex, Brad), lovely children, and to make matters even worse, a successful critically acclaimed debut film production ‘In The Land of Blood and Honey.’  Not to mention that Brad owns Plan B Entertainment which Jennifer used to share with him before he dumped her for Angelina!

Jennifer has decided that her answer to all of this galling success on the part of the Jolie-Pitt duet can be found in Justin.  All she needs to do is get him to marry her, impregnate her, and buy the two of them a production company!   She already bought them a huge Bel Air mansion a couple of months ago – and as you will learn below she is working on acquiring the production company!

Jennifer is in the process of buying a production company for her and Justin.  She is making sure that Justin never leaves her the way Brad did.  She is doing everything she can to buy and keep Justin’s love – despite his unfaithful behavior.

SEE: Jennifer Aniston and Justin Theroux Break Up and Get Back Together

OK! Reports:   Spring is a time for renewal, and for Jennifer Aniston, the season brings a burst of hope and change — personally as well as professionally.  Not only do Jen and her beau, Justin Theroux, have babies on the brain, they’re seriously talking business, too.

“She’s planning to set up a production company with him,” an insider reveals exclusively to OK!.  Jen, of course, had such a company with ex-husband Brad Pitt (Plan B Entertainment), but she dropped out of the venture after their 2005 divorce, leaving Brad sole owner.

“Giving up [Plan B] was something she always regretted,” the insider says. “But with Justin, she feels she has a second chance. He has a number of scripts written, and Jen’s really pushing to get them made because she’s a huge fan of his work.”

Jennifer has been visiting fertility clinics and seems to have given up alcohol – one also presumes that she has sex with Justin in her desperate need to get pregnant.  Even at her birthday bash held at the Chateau Marmont last month she refused to touch a drop of booze.

According to a witness:  “The party was on the roof of the Chateau Marmont. I’ve never seen anyone have a party on the roof. They had heaters and tents, and a bar and waiters and staff,” a source tells OK!. “Jennifer was wearing a black dress, no sleeves, hair down, like she usually has. Justin was wearing a white long-sleeved button-down shirt with suspenders. She was not drinking at all, all night.”

“Justin and Jennifer kissed and hugged and were very affectionate with each other,” says the source. “They were both welcoming guests in to the party together. They were just relaxing and she was opening up gifts.”

So all that remains in Jennifer’s plan to catch up with the Jolie-Pitts is get Justin to marry her and actually get her pregnant.  Can she do it?  Can he do it?  Sadly, Ms. Aniston can’t seem to understand that the love Angelina and Brad enjoy together was not bought.  Why is Jennifer so needy?  What do you think?  Let us know in the comments below.