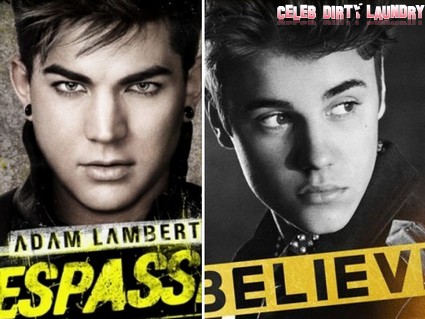 Justin Bieber has revealed the cover art for his new CD Believe. A more grown up Justin is pouting in black and white. The graphics are in yellow. Look familiar? That’s probably because it has more than a passing resemblance to Adam Lambert‘s latest album Trespassing. Is Bieber a copycat? What do you think?

The Biebs unveiled the much anticipated cover on Twitter. He tweeted ‘in the studio putting the finishing touches on #BELIEVE then going to see my big bro @UsherRaymondIV on broadway. anyone want to see...’ That was followed by  ‘anyone want to see the #BELIEVEalbumCover ?‘ Then the twitterverse exploded and #BELIEVEalbumCover became the number one trending topic worldwide.

Justin finally decided it was time to reward his fans … ‘and this is the #BELIEVEalbumcover  #52DAYS – exited? expect the unexpected‘ He tweeted both covers. Of course The Beliebers love them  – but Adam’s legion of fans The Glamberts might not be as impressed with the standard CD cover. The deluxe cover is colored and doesn’t look as much like Trespassing.

It’ll be a while ’til we see the cover in the flesh. As Justin tweeted Believe is still over a month away. It’ll be released June 11. Here’s what we can expect from the man himself ‘This new album is crazy. I’ve spent the most time on it creatively, just writing myself and being involved in the whole process. It’s something that comes from my heart. I hope all my fans and all my Beliebers like it. With my new album, Believe, there’s so many different songs and so many different styles. It’s really versatile and fun.‘