Kate Middleton Sweating And Barefoot Under The Olympic Pressure (Photos) 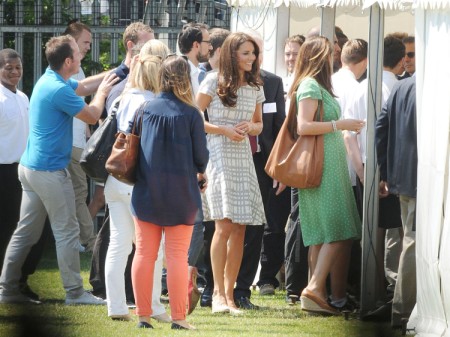 Kate Middleton tried her hand at a little bit of Judo and ping pong and Prince William couldn’t help from scoring a goal as the young couple, along with perpetual third wheel Prince Harry, attended the launch of a new sports project in south east London that aims to train the next generation of sports coaches.

Kate, William and Harry’s charity supports the project and they got their fill of money well spent as the children demonstrated Judo, basketball, five-a-side football and table tennis at Bacon’s College in Rotherhithe.

The Daily Mail has other pics of Kate actually getting in on the fun. You can see her kicking off her shoes and trying out some Judo moves (maybe for the next time Camilla Parker-Bowles gives her a saucy retort?). She really got into it too. Her face is all sorts of sweaty at the ping pong table. Can’t she have her people blot her up in between events? I will say this for Kate though, she’s a sport about things. She’s nothing if not willing to please. The Olympics are obviously a big deal for London but, with all the appearances she’s going to make, they’re a big deal for her too. Perhaps the beads of sweat are not all from swinging that paddle around?

In other Kate news, the royal couple announced their royal tour of Asian plans for the fall. They’re visiting Singapore, Malaysia, Borneo, Solomon Islands and Tuvalu all within 8 days. That’s a pretty heavy schedule but it’s not like those flights in between stops are long or anything. I’m never going to feel sorry for someone who HAS to tavel to the South Pacific. But I’m sure the Kate Middleton pregnant stories will have to fade a way for a little bit. Wills wouldn’t let Kate do all that “work” if she was with his royal child, would he? Doesn’t mean they can’t make a baby in Borneo. Maybe they could go the Beckhams routes and name their child after where it was conceived. Queen Tuvalu anyone?

Check out the pics below. What do you think of Kate’s dress? I’ve heard from some that it looks too housewifey but I think it’s cute. I would have loved to have seen her rock some skinny jeans again though – more sporty. I love the pic of Will’s hand on her back. That’s a signature move with him. I can’t help but think it’s sweet!