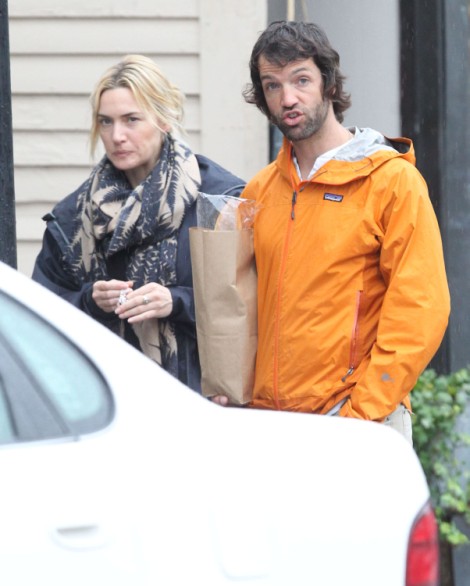 I know, I know, I always fall for this. Why would anyone plan a quickie wedding with hardly any friends and family to a guy you’ve only known about a year unless you were knocked up? And don’t give me that true love nonsense. This is Kate Winslet’s third marriage and she has a baby daddy with each husband so far. Is Kate benefiting from the Taylor Swift treatment? I wrote a post not to long ago about how Taylor Swift dates all these dudes but is still considered sweet and virginal whereas Miley Cyrus is labeled a slut even though she’s dated Liam Hemsworth for the last few years. I’m not calling Kate Winslet a slut. I’m just saying her Oscar nominations, talent and lovely accent definitely help the fact that she just chained herself to a guy who changed his name to Ned RocknRoll.

Why do I care? I don’t… too much although I really, really like the movie Pride and Prejudice and he’s ruining it for me somehow. But wouldn’t you think a mom of two would wear protection? I KNOW! I’m jumping the gun. She could possibly not be pregnant but Page Six had an leading story today about the wedding and sources told the mag that Kate is definitely not in the family way even though she was recently seen with a tiny baby bump. Whenever people bother to respond to rumors with a negative then things start to smell a little fishy. If anything, I’m just worried about the faux baby. Who would want to go through life with a dad who renamed himself Ned Rocknroll? What will the kid’s name be? Alistair Rocknroll? No! No! That does not work and I won’t pretend it does for Kate’s sake.

Is Kate Winslet pregnant? Anyone seen any pics lately of Kate Winslet’s baby bump? Let me know! I can’t find any. I just found out that Kate’s set to star in the movie adaptation of The Guernsey Literary and Potato Peel Pie Society. AHH! Julie Ashton CAN NOT be married to someone like Ned Rocknroll!