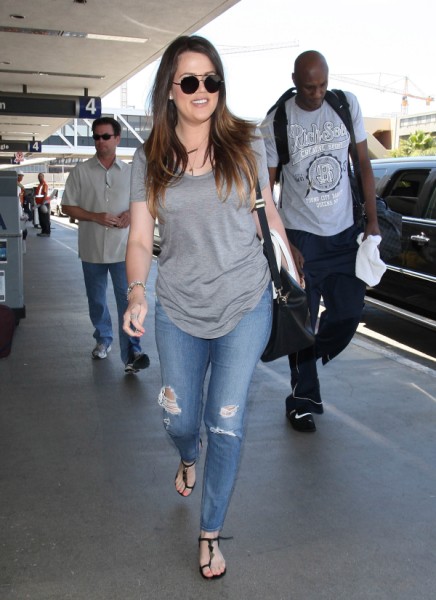 So Khloe Kardashian is coming under fire for being too real on her reality show. Apparently the Keeping Up With The Kardashians Dish It Out Special showed clips of Khloe and Lamar Odom going all Fifty Shades of Grey on each other. First we got to see a lovely scene of Lamar spanking Khloe while she leaned over the sofa and then they changed the scenery and went to the bedroom where Lamar could try out one of his riding crops. “You little bad girl,” Lamar told said while spanking.

“It’s kinky. I like it when I get disciplined,” Khloe later told the cameras. “I’m very comfortable with my sexuality. I don’t have a problem taking about sex. It’s about having a healthy a sex life.”

I can’t believe I’m even writing about this since it’s so obviously scripted but whatever. Sexual TMI is Khloe and Lamar’s thing. Just as Kourtney and Scott have the handle on volatile relationships and children and Kim and her flavor of the month have the superstar/sex tape route. Kris Jenner isn’t stupid. The important thing to remember about raising large families is that each person has to have their own special shtick for everyone to feel like they’re contributing. So Khloe and Lamar are on the dominatrix bandwagon. They’re pretty smart considering the hype over those stupid books at the moment.

What’s crazy to me is that people actually take Khloe and Lamar seriously and even think they’re having sex to begin with. Of all the conspiracy showmances people like to blame Kris Jenner for, it’s the most obvious to me, but because people like Khloe so much more than the other Kardashians she gets off on all the judgement. I definitely don’t see anything kinky going on in that relationship when the cameras aren’t there to film it.

Do you think Khloe Kardashian and Lamar Odom reveal too much because there really isn’t anything to reveal at all?