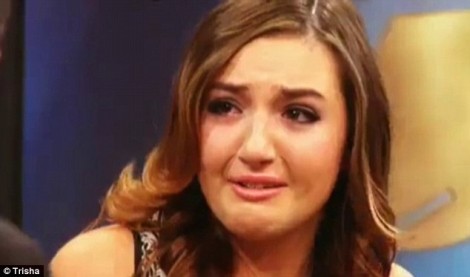 So… Lindsay Lohan’s new sister is Ashley Horn. Welcome to the family! I’m so, so sorry for you.

Apparently her backstabbing DNA did positively ID her as Michael Lohan’s daughter during a routine appearance onThe Trisha Goddard Show. Now that’s low budge. Was Maury Povich busy or does he not even want to associate with the Lohans?

So what do we know about this seventeen-year-old? She wants to break into the entertainment business! Naturally! According to the Daily Mail, Ashley is a budding pop star who goes by the name AshleyA. She recorded a few tracks last year because she was determined to make her way without her famous family’s help. But first she had to namedrop who her famous family was just so we were all clear. Ashley’s mom, Kristi Horn, hooked up with Michael sometime in the ’90s when he and Dina Lohan were on one of their many dysfunctional breaks.

I’m not quite sure why this is news. This shit’s been going on between Michael Lohan and Ashley’s mom since 2008 and it was pretty much confirmed he was her dad back in 2010. Why they’re drudging everything back up now I have no idea. I just want to shake Kristi Horn and say, “Biotch, who cares if Michael Lohan admits he’s the father. You ain’t getting child support no way!”

What’s funny is during the Goddard show, which airs tonight, Michael tries to finally acknowledge Ashley and give her a hug but she rebukes him and cries, “I don’t want to be part of the Lohan trainwreck.” Haha, too late. It’s in your blood now! But it does show sense so maybe Kristi’s DNA provided that since Dina’s sure as shit didn’t. There’s hope for you Ashley Horn. Hope!

Despite the new addition to the family’s misgivings, do you think Ashley Horn and Lindsay Lohan will hook up and try to create a relationship? Is it best for everyone if Ashley just stays away?