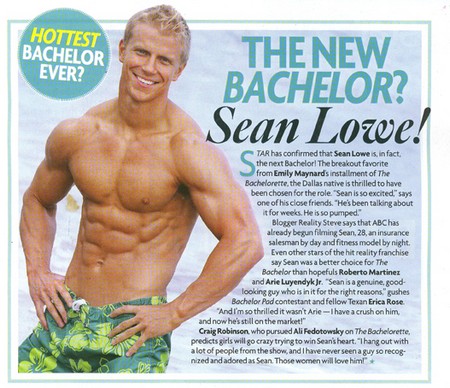 Emily Maynard’s season of The Bachelorette did not make for good television. In every episode, she was too sweet, innocent, constantly victimizing herself, being honest and sending guys home with a kiss on the cheek. That is not what viewers are tuning in for! Last season we watched Emily cry her eyes out (but her mascara stayed perfectly in place) when deciding between Arie Luyendyk Jr. and now fiancée Jef Holm. She and Jef got engaged in a back alley decorated with flowers.

My smut TV quota has not been satisfied, so I am psyched to announce that Sean Lowe, a runner up from Emily’s season, has been named the newest The Bachelor. Will he find love on TV? Probably not.

If you didn’t watch, Sean is a great catch (hint: sarcasm). Super sweet, kind, good family, and a sense of humor. Last season he told Emily he lived with his parents, taking her on a tour of his messy room and muttering that his mom should have cleaned before she came over. It was a joke though—but Emily dumped him after it.

Sean also sports an 18-pack, turns really red in the face when emotional, and puts more gel in his hair than Justin Bieber. Of course, the woman who wants it all will be disappointed by his lacklustre job as an insurance salesman. Will you tune in for this new season of The Bachelor, and all of the hot tub, fake boobs, cat fights, and steroids that follow? Rumor has it that the girls are picked and in LA, and they begin filming on Monday!