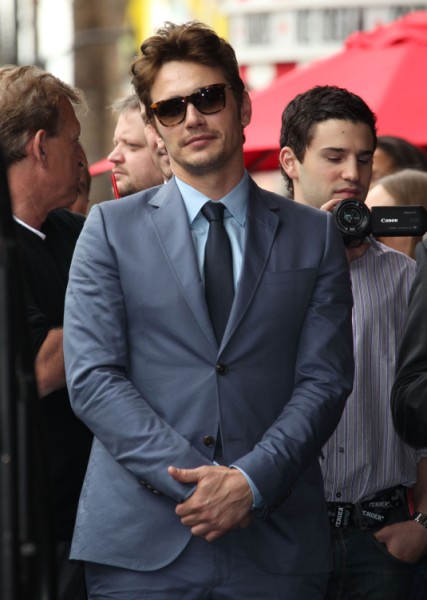 Thank God for Howard Stern. Without him we’d be stuck with the most boring celebrity interviews. Luckily this was not the case for James Franco. Howard did what he does best and got James to open up about the Anne Hathaway haters and almost having sex with Lindsay Lohan. That’s a pretty nice spread of information there. Let’s just get to it.

On Anne Hathaway and those other horrible Oscars: “I’m not an expert on – I guess they’re called ‘Hatha-haters’- but I think that’s what maybe triggers it…. We haven’t talked in a while. Anne and I made up, by the way. Let’s just get that on the record. It was a really hard time after the Oscars. She wasn’t mad at me, I don’t think … she didn’t say she was mad at me for what happened. … The critics were so nasty.”

On turning down sex with Lindsay Lohan: “I don’t want to like brag about it. I don’t know how that got out. She was having issues even then, so you feel weird. Honestly, she was a friend. I’ve met a lot of people that are troubled and sometimes you don’t want to do that.”

How gross are you if a an actor turns down having sex with you? The hits just keep on coming for Lindsay Lohan. But what do you think about the other comments? Does James Franco hate Anne Hathaway like so many others right now? I’ll be the first person to call James and his insufferable smugness a douche but it didn’t come off that way here, did it? He was almost cool about the whole thing. Howard did most of the bashing. You’ve got to feel for Anne though. Hopefully she can keep a low profile for a while and ride this out. It sucks one of the most important moments in her life had to be marred by all this hate. I’m not saying she didn’t deserve it but everyone could do her a favor and move on. That hat she’s wearing in the pics below isn’t helping anything though. Just saying….

The only thing that kinda bothers me is that because of this recent Oscar season Anne just has to suck it now. Before everyone ridiculed her for her terrible speeches she was the one who actually came out on top during the Franco/Hathaway hosting debacle. Most blamed Franco for the terrible performance. But now, because it’s suddenly uncool to like her/defend her, Franco can start mouthing off and pointing the finger a little bit more. He’s not totally doing here but I can just feel it for some reason!

What do you think of the Howard Stern/James Franco interview? Was it just more Franco being douchey Franco or did he actually come off as a likable dude for once?