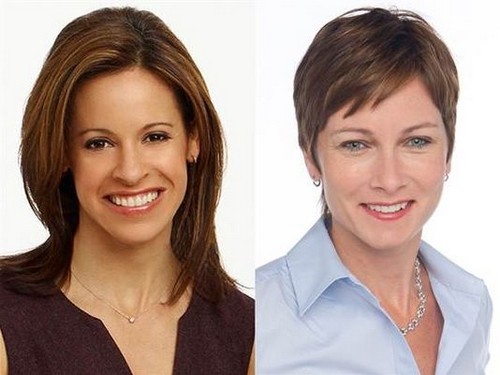 Remember last week when NBC’s Jenna Wolfe sat on the Today Show couch with her friends and colleagues sharing her fantastic baby news?  Remember how she absolutely beamed with joy to be able to spill the details on her life rather than have to keep it swept deep under the rug? Well, apparently NBC execs ordered her to make an announcement after receiving word that she and partner Stephanie Gosk had done an interview with People Magazine, basically coming out and announcing their pregnancy news.

Jenna was asked to share her news on live television the same morning that the issue of the mag hit newsstands to help NBC save face in the most ironic of ways. Last fall the peacock network shifted Jenna from Weekend Today co-host to glorified news reader. She has spent months watching a truly boring Erica Hill take her place while she and good pal, Lester Holt still manage to share chemistry even with Erica sandwiched between them.  She has admittedly had a bitter pill to swallow but it seems that in the last week it has become painfully obvious how NBC completely mishandled the whole situation.

According to the April 15th print edition of GLOBE, the Today Show could have been the ones to usher in Jenna’s news in a supportive way. Instead they were scooped on a story involving one of their own because they themselves were simply too afraid to tell it. That fear leaves the flailing network with egg on its face and unanswered questions as well.

Why exactly was Jenna demoted at precisely the same time that her partner was transferred from NBC’s London office back to NYC? Did execs catch wind of the fact that this couple was intent on having a baby? Middle America had no clue of Jenna’s relationship status but everyone at the network had a clue. By all accounts her colleagues not only have known of the relationship but are said to be supportive of the couple. Was it all just too scary for the network?  It’s pretty ironic that Jenna carried herself as a professional through all of the drama and simply lived her live and now NBC is left to look as foolish as ever.

Did the network try to bury Jenna’s personal life only to have it explode in everyone’s lap? Tell us your thoughts in the comments below.