Jennifer Lopez Overdoing It On The Plastic Surgery To Stay Young For Boy Toy? (PHOTOS) 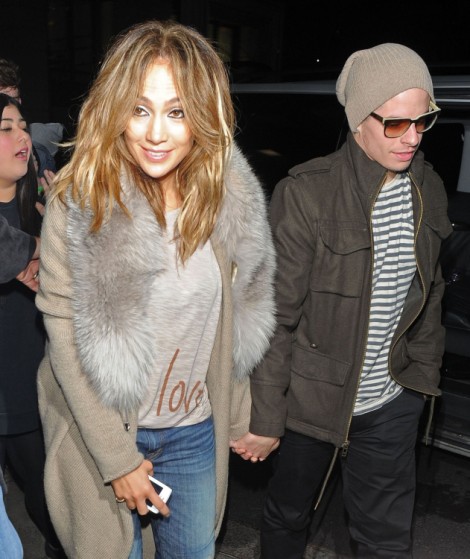 God I hate to be the one to point it out but… she looks a little different, no? Maybe she’s just tired. Jennifer Lopez performed on Britain’s Got Talent right before these were taken so maybe it was a long day. Maybe she was jet-lagged or maybe she was trying something new with her make-up. She also could be going heavy on the plastic surgery. Jennifer Lopez is 43. Her boy toy, Casper Smart is 25. Don’t tell me she hasn’t thought about it. You don’t crawl around on stage with your crotch hanging out unless you have something to prove.

And that’s exactly what she did on Britain’s Got Talent. Jennifer Lopez pumped her plump ass in everyone’s face last night to stellar reviews by Simon Cowell but it looked very Beyonce/Super Bowl to me. Is she wearing the exact same costume? And in the after pics, doesn’t she look like Tina Turner? When did it stop being enough to just be JLo? Was it when she started treating back-up dancers like they’re equals? Just a thought.

The more I look at the photos it could just be bad lighting and bad make-up. She’s doing the Kim Kardashian cat-eye thing and it ain’t doing her any favors. It makes her look like she’s just had a face lift. I think I’m just all about plastic surgery right now  because I just watched the Michael Douglas/Matt Damon movie, Behind the Candelabra. Crazy amazing, right? It totally scared me off of getting shit done to my face. Back them people thought what they were getting done was safe. Same as now. But then you find out ten years on you were injecting concrete or something equally disgusting in there. It’s just freaky! Drink water with lemon first thing in the morning. That’s Martha Stewart’s miracle elixir and she looks fabulous!

So what do you think about JLo? Bad lighting or is she going the way of Liberace?

Jennifer Lopez and boyfriend Casper Smart arrive back at the Dorchester hotel in London after appearing on Britain’s Got Talent on May 28, 2013