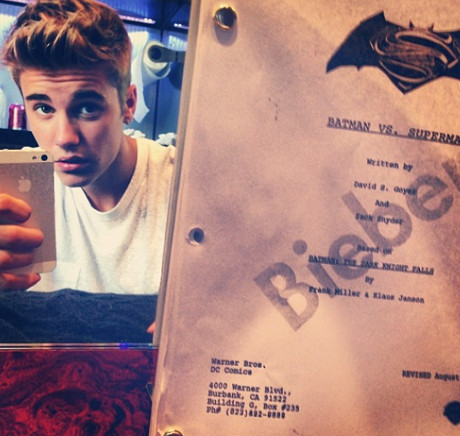 Let me start from the beginning. It all started when Justin Bieber tweeted a picture of what looks like a legitimate copy of the new Batman vs. Superman script. It has the right symbol, it has Batman Versus Superman in the title section, followed by ‘written by David S. Goyer and Zack Snyder’. It then states ‘Based on Batman: The Dark Knight Falls by Frank Miller and Klaus Jensen.’

It shows that the script is the property of Warner Brothers, and Justin captioned the photo with, “#robin??”

Obviously, this led to a complete fanboy and fangirl meltdown on the Internet. Fans of Justin Bieber were ecstatic with the thought of him playing Robin, whereas everyone else freaked out in every way possible. However, I just have a really, really hard time believing that Warner Brothers would ever entrust their golden baby to Justin Bieber. Nothing against Justin – well, no that’s not true – but he doesn’t have acting experience and would never suit the character of Robin. It’s also unlikely that the studio would even be introducing the character of Robin in a movie that already has to introduce Batman and a veritable slew of other characters.

Now, a lot of people are assuming that it’s all part of a Funny or Die skit, and that Bieber is just punking everyone. If it is true, and this is somehow legitimate, I think we can safely say that WB and the filmmakers have completely lost their minds. Completely.

What do you guys think about Justin playing Robin, or being involved in any way with the Batman versus Superman movie? Let us know your thoughts in the comments.