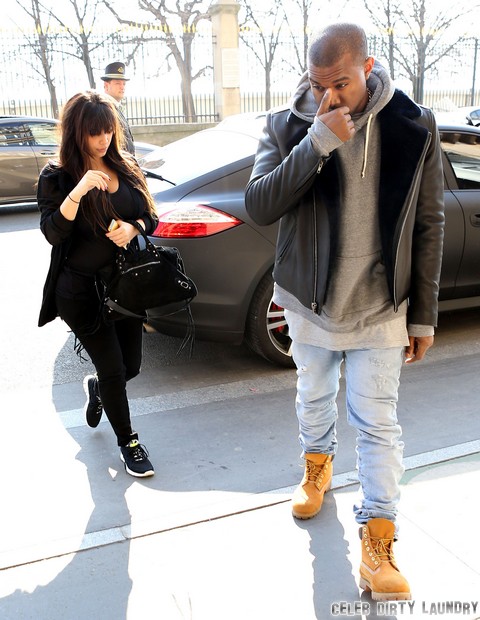 Things just got deadly serious for Kanye West now that Kim Kardashian and Kris Humphries are officially divorced! This time last year he was floating on cloud nine because his fantasy girl, Kim Kardashian was now on his arm and probably starring in videos for his private collection. He proclaimed her to be his “perfect bitch” and made it clear that he has wanted a piece of her for years. He revamped Kim’s wardrobe and tried to teach her how to be a little less fake and a little more classy. I’d say he had the tiniest bit of success on that venture too. Kim gave up bandage dresses and ripped out her weave, right?

The problem is, Kanye’s favorite new muse had an agenda of her own. She wanted a baby and as Kourtney and Kim Take Miami fans already know, she pretty much set Kanye up. He seemed genuinely surprised to find out that she was pregnant and for a few days pretended to be excited. I guess Kanye probably thought he could transform Kim into the hottest mom ever and then after she delivers they’d just hire a team of nannies so that their life could go on as planned.

I guess he didn’t realize that Kim would turn into a big baby herself and make everyone around her just as miserable as she is. The misery is so bad that Kanye has chosen to only spend 18 days with Kim since announcing the pregnancy. For him, Paris is much better. He has peace and fun. The drinks flow, as do the women and there is none of his baby mama’s crap to endure. Kanye was loving the fact that Kim was technically still married to Kris Humphries. He legally couldn’t marry her which made for an easy out. As of today though, Kim’s divorce is officially a done deal and she’s a free agent.

Kim and Kanye aren’t in a good place and now he’s feeling the heat to step up and propose. Kanye resents the pressure that is now placed on him and it’s ridiculous to think he’s just going to marry someone that he can’t stand even being around! I doubt Kanye will buckle to the pressure though. He is as self-absorbed as Kim which means he doesn’t do anything that he doesn’t want to!

Do you think Kim is trying to pressure Kanye to marry her? Tell us your thoughts in the comments below!