Kate Middleton Due Date Being Questioned – Is She Lying Like Kim Kardashian? 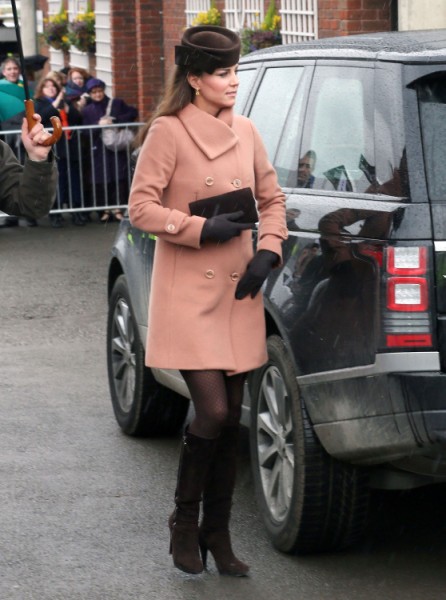 Kate Middleton took her baby bump on parade last weekend when she honored the Scouts at Windsor Castle. Most people had pretty complimentary things to say about the Duchess and her growing heir. Her Burberry coat was lovely and, as usual, her over-the-top smiles conveyed that there was nothing else she’d rather be doing than working. But could we have a baby bump scandal in the making? Although there are finally hints of one, Kate Middleton’s is considered too small by many. Did the palace lie about her due date or is Kate just one of the lucky ones?

I’m not so sure about this. Kim Kardashian lying and reporting she’s not as far along as she truly is because she wants to buy herself time to work out (or recuperate from surgery) after the birth makes sense. But Kate claiming to be farther along than she actually is would be a head scratcher for me. I can’t find the benefit in it. Perhaps that would get her more time off work and at home with her parents? And the lying issue is also a non-issue for me because the palace never gave a due date. People assumed she was around 6 weeks when she was rushed to the hospital for (cough, cough) hyperemesis gravidarum. Kate has admitted she’s due in mid-July but she was also coy in giving out that information adding babies’ have their own time frame. So who really knows for sure? Could her people be so vain that they would claim she’s farther along than she really is in an effort to appear more slender and sleek? Believe me, I love to believe crazy shit but even I can’t fall for that one.

The Daily Mail had a story yesterday asking why Kate was so small. They compared pics of her to Diana at a similar stage. Diana did look much larger but she was also wearing an ’80s muumuu which didn’t help anything. Kate wears streamlined short coats that highlight her legs and minimize the bump. It’s not hocus pocus. It’s just clever and better styling.

I wish there was a baby bump scandal to harp on but I’m afraid this just comes down to good genetics and an extremely healthy (and limited) diet. If we want the conspiracy theories we’ll have to stick to Kim!

Is Kate Middleton’s baby bump too small or is she just right for a fit first time mother?