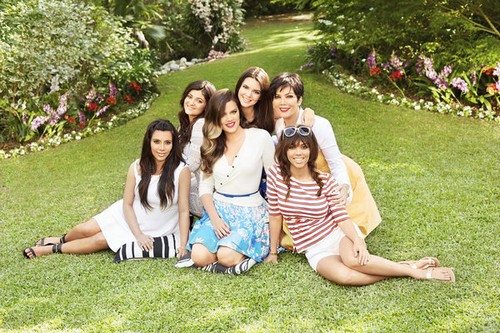 As much as we all hate the Kardashians, we continue to ‘Keep Up’. Selena Gomez is hanging on to Justin Beiber in a desperate attempt to regain a little limelight, she lost her fan base when she broke up with him. Kate Middleton is stalling on dropping her royal bundle of joy, so might as well tune in.

Having a baby seemingly brought Kim Kardashian closer to her sister Kourtney Kardashian… but what about Khloé Kardashian Odom?

Judging by this preview clip from Sunday’s episode of Keeping Up with the Kardashians, it looks like Khloé is feeling a little left out. After showing to go out to dinner with Kim and Kourtney, she finds her sisters going through baby items instead of getting ready.

“When you guys do baby stuff, you don’t talk to me!” Khloé complains. But Kim and Kourtney brush her off, so Khloé goes out with Kris Jenner instead.

Khloe Kardashian Odom was feeling the blues anticipating the arrival of baby North West. With Mason, Penolope, and now North, Khloe is obviously a little jealous. Her husband, Lamar Odom, has lost his stroke on the court, but regained it off the court, with rumored strippers ‘PROS’, and random blondes. Odom told Khloe he wanted a baby up front. Khlo-Mars’ attempt at a baby was well publicized, and documented on their show, Khloe & Lamar. Either it’s not meant to be, or Khloe is not really a Kardashian. Even if Mason isn’t Scott Disick’s biological kid, he’s still an heir to the Kardashian empire.

Kim hasn’t grown closer to Kourtney, don’t worry Khloe. Kim is a trash bag booty opportunist who knows that she will definitely need help. A screaming teething little baby doesn’t fit into the lifestyle of the globe trotting Kanye ‘Yeezus’ West, and the surg-A-holic reality star. Kris Jenner is too busy trying to sell North West’s picture and creating headlines (flashing her gray tiger to paparazzi) to be on grandmother duty. Kourtney will be stuck raising North when Kanye isn’t busy pretending he and Kim are Jay-Z and Beyonce. Khloe should just keep an eye on ‘Lammy’, and keep encouraging Robert Kardashian Jr. to come out the closet.