Khloe Kardashian Using Family To Help Keep X Factor Job, Will She Get Fired Regardless? 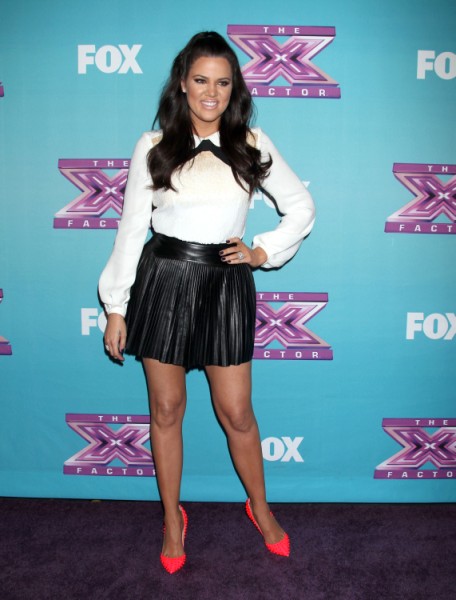 I thought the news that the X Factor fired Khloe Kardashian was as good as gold but I was wrong! Well, that’s according to the Kardashians and we all know their word isn’t exactly their bond. But still, they’re rallying and insisting that little sis Khloe is still employed… for now.

Kim Kardashian made sure to tell her best friends (TMZ) her side of the X Factor host story after landing from a 20-hour flight from Nigeria yesterday. When asked about the Khloe situation she said, “A lot of people say a lot of incorrect things on the daily.” And when asked what has happened so far she only replied, “Probably nothing.”

If I was Khloe I wouldn’t be too comforted by these words but she’s got to be stoked her family has her back. And they need to keep having her back if she has any chance of keeping her job. Word on the street is that the X Factor is planning on keeping Mario Lopez but is still unsure about Khloe because she just never found her groove last season. Apparently reality show hosting and reality family shows require two very different skill sets which is funny since I thought all they required was for the people to always wear fake eyelashes and play with their hair a lot. Damn those cue cards! Did Khloe really not improve throughout the season? Let me know because I didn’t watch. My brain rotting television sways in the Bravo direction. I prefer Real Housewives to talent shows.

But you don’t think Kris Jenner and the rest of them are going to let Khloe fail without a fight, do you? Don’t you know? Kardashians fail on their own terms! Maybe mama Kris can induce the show to keep her if Kim agrees to show up with that baby in the front row next season. Or maybe Rob can agree to date one of the contestants? Kourtney and Scott can get into a fight during one of the crappy performances! The options are endless!

So what’s next for the X Factor? Khloe Kardashian was supposed to be a huge draw for the show. Can the Kardashians work harder for her next season?