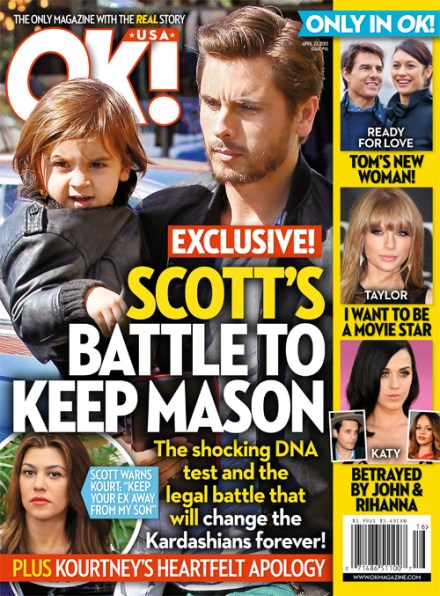 Nothing really shocks me when it comes to the Kardashian family. They are capable of pretty much anything and have collectively found a way to pull off a multitude of schemes so nothing shocks me. One of the most recent scandals involves Kourtney Kardashian and her three-year old son, Mason. Supposedly, her douche-lord boyfriend of forever, Scott Disick is the daddy in spite of Mason being conceived while they were broken up.

Just recently a male model named Michael Girgenti claimed that he is quite possibly Mason’s real biological dad (and if you look at this guy’s photo it seems very possible) and that Kourtney is refusing to do a paternity test to find out for sure. Publicly the Kardashian’s have threatened to sue but according  to OK Magazine, behind closed doors, Kourtney is really worried. Scott has warned her to keep Michael away from their son and Kourtney has reportedly apologized up and down for creating this situation in the first place.

Also in OK, it seems that Taylor Swift has some serious aspirations besides just singing about her exes. She wants to act in movies and it’s supposedly a goal that she is now taking pretty seriously- probably because she doesn’t seem to have a guy in her life to obsess over now.

Speaking of guys, John Mayer may have out down himself (and that’s saying a lot) by hooking up with Katy Perry’s former bestie, Rihanna.  According to OK the known womanizer managed to work his magic on Rihanna while still pledging his devotion to Katy.  I don’t understand why on earth she believed that he was going to behave himself in the first place. Everyone warned Katy that she was going to end up just like all of the other women he has dated. How come she didn’t listen? Tell us your thoughts in the comments below!