Robert Pattinson Spotted With Kristen Stewart Look-Alike, Is He Trying To Send A Message? 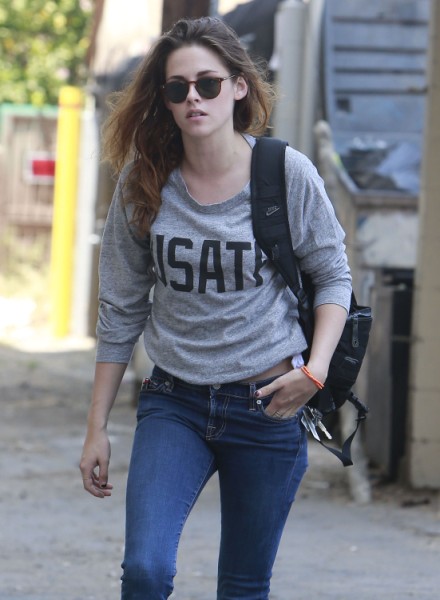 For a good few seconds there I thought it actually was Kristen Stewart. I thought we were back to playing the Rupert Sanders game again. Remember a couple months ago when a Sanders look-alike picked Kristen up in his car and everyone screamed it wasn’t him and I refused to believe it? Still, no one has proven me wrong on that! But in this case, Robert Pattinson’s mystery woman turned out to be exactly that – a mystery still – and not Kristen Stewart. The single actress is finally back from her road trip but is on the move again. She was caught yesterday on a flight out of LAX. The Sun characterized her as “grim” and “heartbroken” as the new pics of Rob emerged but I’d say she looks like everyone else getting ready to walk into LAX – annoyed and pissed.

But back to the Kristen Stewart look-alike. Robert Pattinson was really in the mood to play ping pong last Saturday because he and a red-headed friend were spotted sporting one in his pick-up truck. I love how The Sun described the situation with: “He took his new pal back to his Los Feliz mansion – for a quick game of ping pong, presumably.” Yes, presumably indeed.

God damn, it’s uncanny how much that chick actually looks like Kristen. I’m doubting it all over again. But it can’t be, right? There’s something in the profile of the chin and lips that’s just barely off-putting. Definitely not her. Sorry twihards! So who the hell is she? She’s not Katy Perry that’s for sure. Katy’s plan worked to perfection. She stuck by that single/heartbroken Rob just long enough to freak John Mayer back into submission. So Rob’s onto a new girl that’s a friend to pass his hours with. Again, why doesn’t this dude have any male friends?? It’s bizarre to me. There’s nothing hotter than a guy hanging with his group of guys. Leonardo DiCaprio knows this. Maybe it’s because Rob (like Tom Cruise!) grew up with sisters and not brothers. I don’t have time to analyze this kid but that’s got to be a pretty good guess.

So back to the matter at hand – should Kristen be worried about her doppelganger? Do you even think she gives a shit at this point? We’re getting to that pretty tricky point in the break-up. Enough time has gone by that perhaps the two are realizing that it’s more than OK to be with other people. Surprise, surprise, life actually continued despite them being apart. It’s amazing how that happens. Once young couples realize that reconciliation gets more difficult. BUT he’s spending his time with chicks that look just like his ex. Isn’t that the basis of an Apatow comedy? I can’t think of it off the top of my head. Regardless, is it a message or a coincidence?