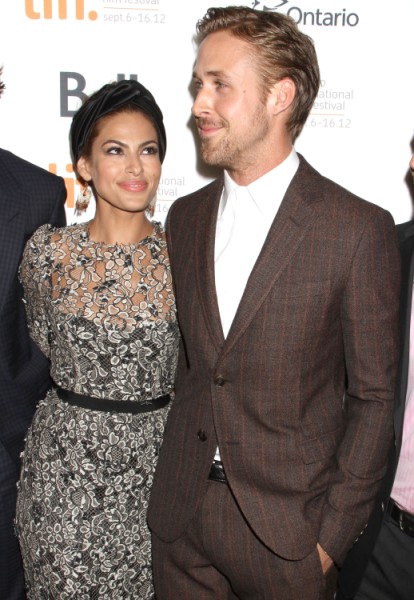 Tongues are always wagging about these two but they really started up again over the Fourth of July. Ryan Gosling spent the holiday in the Hamptons celebrating with his mother (no surprise there) and friends while long-time girlfriend, Eva Mendes was nowhere to be found. Now Page Six is reporting Eva was just spotted in the Financial District surrounded by three male friends on Saturday night. A source couldn’t confirm if there was any flirting going on but did say the dudes paid for everything and even tipped the piano player before they left whatever that means. So… is anyone else getting that smutty feeling? Have Eva Mendes and Ryan Gosling split up?

This would be news to me. Last time I heard these two were still going super strong. Just a couple weeks ago they were working together on Ryan’s directorial debut, How To Catch A Monster, in Detroit. So… I don’t know. A lot can happen in two weeks but maybe the couple needed a little time apart. Perhaps Ryan the Director was more difficult than Eva thought he would be? Who knows? What we do know is this couple is hitting that 2-year mark – shit or get off the pot territory for many women in their late 30s. Could Eva be putting on the pressure? Or is it the other way around? I’d hate to be a traitor to my sex and imply that women are the only needy ones when they hit a certain age. There were all those Ryan Gosling’s Broody stories not so long ago so maybe he wants a family and she’s putting on the breaks. Or just maybe the two had other plans for the Fourth of July and everything is sweet as pie. Oh, but where’s the fun in that??

What does it sound like to you? Is the Eva Mendes/Ryan Gosling relationship on its last legs?