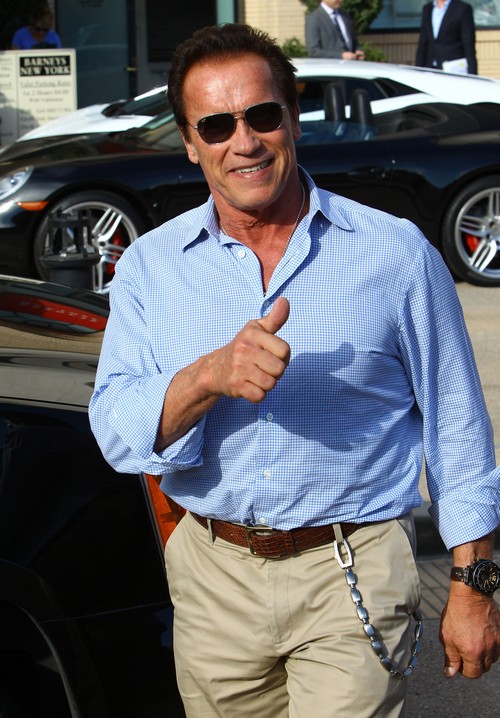 The Austrian Oak, Arnold Schwarzenegger, former Mr. Universe and Mr. Olympia, ex-Terminator, ex-governor of California (R) and soon to be ex-husband of Maria Shriver has learned a lesson that all aspiring Hollywood actors should memorize as a mantra: Don’t mess with the Kennedy’s (Maria is late President Kennedy’s niece) and NEVER go into marriage without a prenup!

His wife of 25 years Maria filed for divorce back in July 2011 after finding out about Arnie’s secret love child with housekeeper Mildred Patricia ‘Patty’ Baena.

Looking at the boy, she must either have deliberately ignored the obvious or be in desperate need of glasses: young Joseph Baena is the spitting image of his father Arnold!

According to TMZ and Fox News Magazine Arnie has about 200 million very good reasons not to finalize the divorce. Since they never signed a prenup, California law makes it pretty simple. Split everything 50/50! Arnold’s fortune is estimated equate to 400 million USD give or take. Now you do the math! On the other hand, Arnold will be entitled to one half of Maria’s wealth which is very substantial, both from inherited wealth and her own successful career.

Arnie must have a tendency not to think about the potential consequences when it’s about love – not only when banging the help, but also when he got married to Maria back in 1986. He had already made it quite big in Hollywood back then, having starred in 10 movies, with roles such as Conan the Barbarian and The Terminator prior to that. So either he had some pretty poor advisers/managers/lawyers back then or just ignored the fact that a prenup might be a good idea.

If not for love, he at least has a good nose for successful movie roles.

During his stints as governor of California 2003-2011 he had put his movie career on hold but picked up right where he left it with The Expendables 2 and 3 (to be released this year), The Last Stand and of course his return to the Terminator franchise which will be hitting the theaters in 2015.

What do you guys think? Should he bite the bullet and get the divorce finalized?