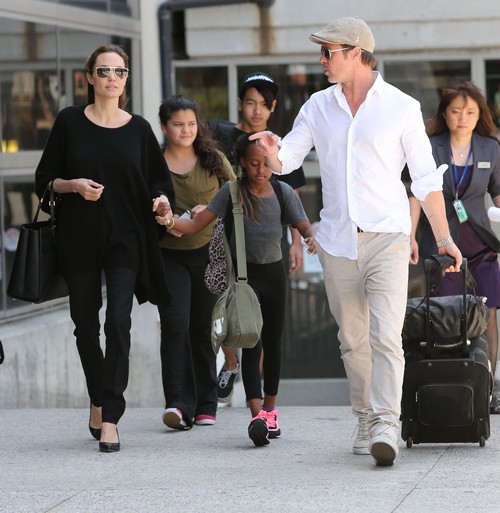 Angelina Jolie has a dark, dark past, and it’s always been surprising to me that more evidence from that past hasn’t made its way to the public. Yes, she’s a mother and a famous humanitarian and coated with the tears of a thousand fairies and all that, but she’s also a former drug addict and Hollywood wild child.

Apparently, the video shows Angelina high on heroin and gibbering on about her sex life – specifically, her sex life with Billy Bob Thornton. Brad Pitt‘s probably thrilled to be heading down the aisle with this hanging over their head.  Also, now that some of her kids are old enough to go on the Internet, imagine how awkward the conversation is going to be if the kids end up finding this video?

Anyway, sources close to the Brangelina camp are saying that Brad’s furious about the video leak, especially since Angelina told him that there was nothing else from her past that could potentially crop up and ruin their lives. While I wouldn’t necessarily cast this video in the life-ruining pile, it’s definitely going to mess with their relationship for a while. After all, Angelina raves about Billy’s sexual prowess in the clip, something that she’s never done in public with Brad. Plus, Brad may suspect that the old Angelina is still in there somewhere, and that she’s only with him for the public image boost. Maybe she truly wants to be back with Billy Bob? It’s all speculation, but you gotta imagine that all of this is going through Brad’s head, even if he doesn’t act on it.