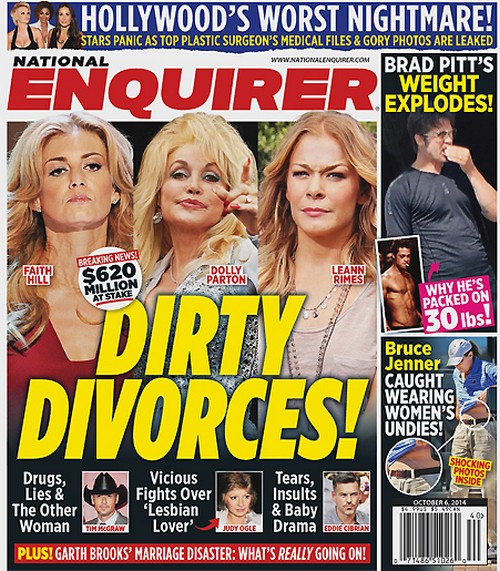 Are Tim McGraw and Faith Hill going to divorce? Well read on and let’s see! Country legends Tim McGraw and Faith Hill’s marriage has reportedly been rocky for quite a while, and according to the October 6th cover of National Enquirer, “drugs, lies, and the other woman” have taken a toll on the couple and a divorce is imminent. Back in June 2014 Tim and Faith finally addressed the rumors that they were divorcing, and insisted they were happier than ever. However, since then things have gone south for Tim McGraw and his country singing wife.

Over the summer Tim McGraw was embroiled in scandal when video footage leaked of him slapping a female fan across the face (really hard) while he was preforming on stage because he was afraid she was going to rip his jeans. Rumors began to swirl that alcohol or drugs may be at the root of the incident, and it looks like there was some truth to them, because Tim recently revealed an unhealthy skeletal body on national television and is reportedly down to just 138 pounds. If there ever was a time that rumors of Faith Hill and Tim McGraw getting a divorce were true, now is definitely that time.

According to the cover of the October 6th edition of National Enquirer, the tabloid also features an expose on all of the other country singing couples headed towards scandalous divorces. The list includes, LeAnn Rimes and Eddie Cibrian, Dolly Parton and her lesbian lover, and Garth Brooks and Trisha Yearwood. The cover of this week’s Enquirer also includes a story on Brad Pitt who has apparently let himself go since tying the know with Angelina Jolie and gained a whopping thirty pounds (which was most likely for an upcoming movie role, but they would never disclose that on the cover).

So, what do you think about Tim McGraw and Faith Hill’s divorce? Are drugs or alcohol playing a role in the split, how else do you explain Tim’s rapid weight loss and violent behavior towards fans? Let us know what you think in the comments below!