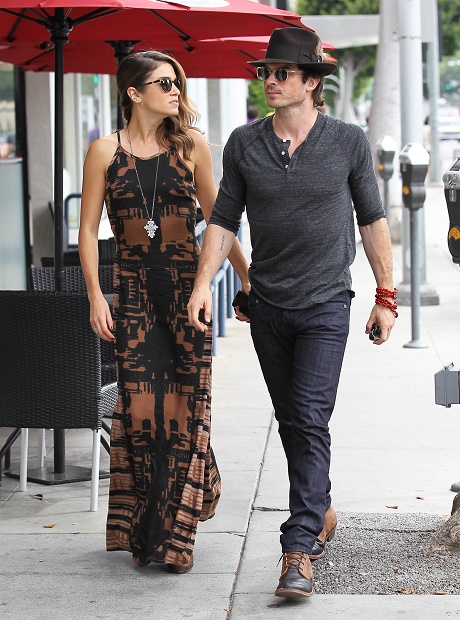 The Vampire Diaries star Nina Dobrev was once the envy of every teenage girl. Now you couldn’t pay half the girls in the world to take her place. Despite Nina’s diva antics, it’s hard not to have pity on her. Since Nina’s highly publicized break-up with longtime boyfriend and co-star Ian Somerhalder, her world has come crashing down on her, and her ex-friend Nikki Reed has moved in on her man.

Nina Dobrev must have been ten times more horrible than we all thought she was, if she truly deserves the hand that Ian and Nikki have dealt her. Not only did Ian break every ex-boyfriend code in the book by hooking up with her friend Nikki Reed, but the new couple doesn’t miss an opportunity to rub it in Nina’s face. As if it wasn’t bad enough that they frolic around in public and can’t keep their hands off from each other in front of the paparazzi, they even went to a sex toy store and purchased hundreds of dollars worth of kinky toys. How awkward is it to wake up and read all over the internet that your boyfriend and ex-BFF went sex-toy shopping together?

As if Nina’s nightmare couldn’t get any worse, Nikki and Ian have apparently taken their R-rated romance on the road, and are hooking up on the set of TVD. The September 22nd edition of Star Magazine reveals, “According to on-set sources the loved-up couple – who started dating in July – can’t keep their hands off from each other and spend hours inside Ian’s trailer when he isn’t shooting scenes.” Star’s source goes on to explain that Nikki visits Ian on set every day, and members of production have noticed his trailer “rocking from side to side” after they go inside.

So, not only does Nina Dobrev have to see pictures of Nikki and Ian canoodling all over the internet, she has to see them together every day on the set of TVD. Awkward! Do you think Ian and Nikki make a cute couple, or would you rather him get back together with Nina? Nina Dobrev hasn’t exactly been an exemplary person over the last few years, but do you think she really deserves this? Let us know in the comments below!