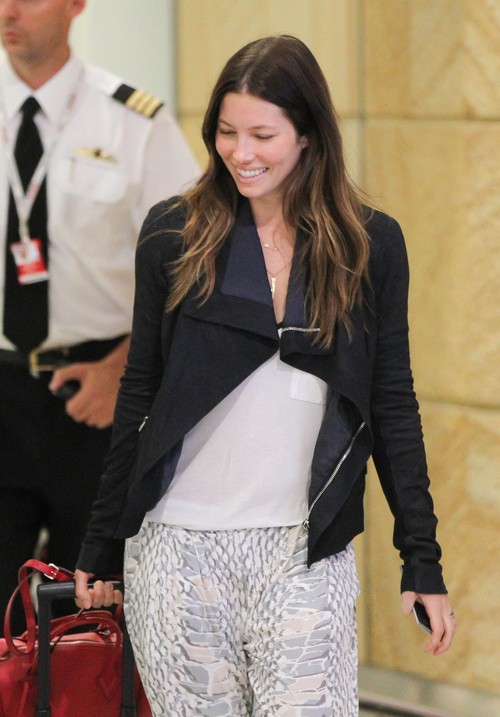 Is Jessica Biel pregnant with a baby-bump? Just last month Jessica Biel and her hubby Justin Timberlake were embroiled in a rumored cheating scandal when Justin was photographed allegedly acting a little too friendly with one of his back-up dancers, Zenya Bashford. It wasn’t the first time that Justin had gotten himself in some hot water over his wandering eye, and Jessica was rumored to be divorcing the pop star. But, it looks like their marriage has done a complete 360 degree turn, and now they are expecting their first child together.

Jessica Biel was photographed arriving at an Australian airport on September 29th, she was scheduled to join her husband Justin Timberlake, who is currently touring Sydney. As soon as Biel stepped off the plane and her photos hit the internet, the media began speculating that the actress was sporting a small baby bump. A few days later Jessica was photographed in a bikini on Bondi Beach in Australia, and there was no question about it, a definite baby bump was present.

This will be Jessica and Justin’s first child together, the couple have reportedly been feuding over when they would start a family for quite a while now. The actress was eager to start popping out little Justin Jr.’s, but Timberlake was adamant he didn’t want children right now and wanted to focus on his career. It looks like Jessica finally got her wish, and just in time to save their marriage, after Justin’s latest cheating scandal.

Jessica and Justin haven’t actually confirmed the pregnancy, but it will most likely only be a matter of a time before they have no choice but to address Jessica’s growing baby bump. Do you think a baby will help Justin settle down? Or will he continue his tour and partying and leave Jessica stuck raising the baby on her own? Let us know what you think in the comments below!