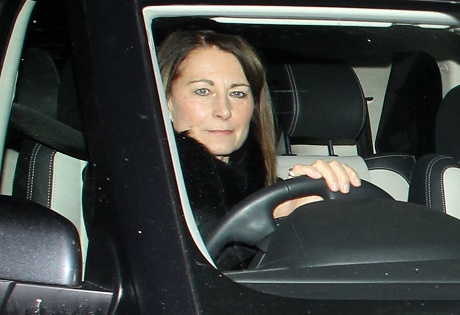 The royals would really like us to believe that they are a tranquil bunch, but the truth of the matter is that behind the scenes there is enough drama to fill an unscripted reality show. Usually, when we are taking this kind of tone, we end up discussing Camilla Parker-Bowles‘ boozy hijinks, but not this time. Instead, this time around, the problem appears to be with Kate Middleton‘s beloved mother, Carole Middleton. Her family garnered loads of attention when Kate and Prince William swapped vows 3.5 years ago, and according to some, things have never been the same.

According to the Sept. 15th print edition of Globe Magazine, Kate’s second cousin, Joanne Callen, caused loads of trouble by giving an explosive interview to a British newspaper. In it she slammed the Middletons and called Carole Middleton “snobbish” and a “social climber.” While Joanne also claimed that her appointed godmother was always very good to her that quote didn’t get nearly as much attention as the one that painted a negative picture of Carole.

Sources say that Joanne Callen is also upset because she feels that both Carole and Kate Middleton have purposely avoided the rest of their family. In fact, they still haven’t met Prince George more than a year after his birth! Needless to say, Kate Middleton is absolutely furious that Joanne dared to speak badly of her mother to the press and she can’t believe that a family member that she was once close to would betray her like this. Carole Middleton is also reportedly pretty stunned because she treated Joanne Callen like her own daughter and never treated her badly.

Do you think that Carole really is a social climber or was Joanne simply looking for a few minutes of fame herself and she knew that badmouthing Kate’s mom would get it? Tell us your thoughts in the comments below!