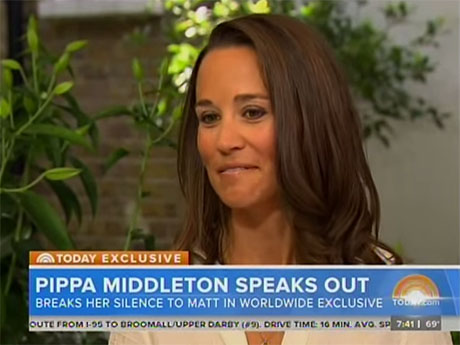 Pippa Middleton can never seem to control her inner famewhore, and she’s about to face the consequences of that. Instead of going about her life – a.k.a. using her connections to land jobs that she’s not qualified for – Pippa decided to do a nationally televised interview on the Today Show.

If that wasn’t bad enough, she then spent most of the interview complaining about how the media was ‘bullying’ her, and how she just wants to live a normal life! Literally, that’s what she said. She wanted to go about her life like every other 30-year-old woman, except I don’t think she realizes that most 30 year olds don’t have access to the obscene privilege that she’s been given as Kate Middleton‘s sister.

Of course, the royals are not AT ALL happy about this. Several palace sources have stated that Kate and Prince William are furious with Pippa, not to mention Kate’s parents. They all think she came off like an unprofessional, spoiled brat – and they would be right. Pippa did come off extremely entitled and spoiled, and what’s worse is that she’s complaining about the press intrusion and tabloids when her sister faces it fifty times worse than she does.

But do you hear Kate complaining? No, because it’s not the royal way. Royals don’t complain in interviews, and it completely goes against aristocratic decorum. You keep your head held high, and you go about your life. Pippa clearly needs to take classes on media training, especially if she plans on working in television in the future

Oh, yeah, that’s the other thing. I guess Pippa’s writing career went down the drain, so she decided she’s now going to work in TV instead. Apparently, she’s looking at a possible anchor position on the Today Show, and the executives over there obviously love the idea because RATINGS. Ugh, imagine having to deal with her every day on our TVs? We’ll never hear the end of her whining.