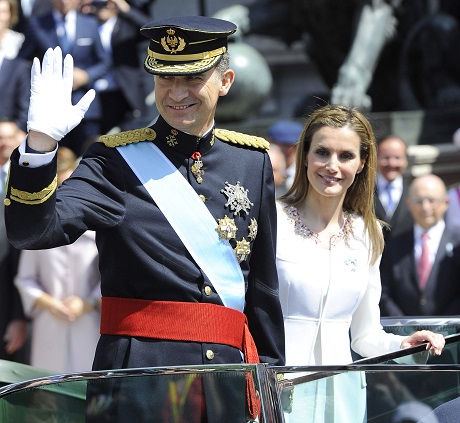 King Juan Carlos has formally abdicated his throne, signing the papers that will grant the throne to his son, Prince Felipe – well, now King Felipe. Felipe’s wife has become Queen Letizia, and their daughters are still Princesses. The older daughter, Princess Leonor, is the crown princess, otherwise known in Spain as the Princess of Asturias.

Anyway, Felipe is now the king, with the crowning ceremony having taken place a few hours ago. The family took part in a military parade, following a tearful coronation. Queen Letizia and Felipe were both on the verge of tears, and it’s refreshing to see royalty act like they actually want the throne and care about it. The English royals that we usually discuss don’t seem to care about ruling a country, much less coming out of their house and seeing their subjects on a regular basis.

But you know what’s the best part of this? The press is going to have a field day with the fashion face-offs between Queen Letizia and Kate Middleton. You think Kate is bitter that Letizia gets to be Queen at such a young age? Because Kate’s looking at that title in another thirty/forty years, give or take a decade for Prince Charles‘ health.

However, with the recent pressure from all sides, Charles actually might not stay on the throne for long. He’s not going to get it for at least another decade, especially since Queen Elizabeth has no intention of giving it up before she dies. But when Charles eventually gets on the throne, he’ll also be pretty old – not to mention, probably making even dumber public statements than his Putin statement. Either way, I’m guessing the throne will be handed down to Prince William sooner rather than later.