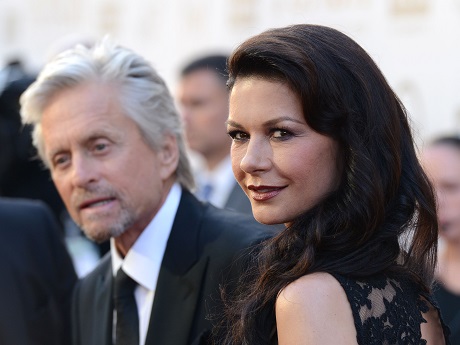 When asked about why she was ‘less visible’ than Michael and Catherine while staying at their shared Majorca villa, Diandra replied, “That’s because I don’ t believe in showing off. I’ve never sold photos or kept money from anything and I’ve always given everything away to charity. I’m proud to be able to say that I’ve never turned my private life into showbusiness. Too much public exposure affects children.”

She’s not wrong about that, but whatever credibility she builds up is immediately shot down when she discusses her son’s [Cameron Douglas] drug charges and prison sentence. She states, “It’s horrible that someone with money and famous parents should receive such tough punishment.”

Um, excuse me? First of all, she was JUST criticizing Catherine and Michael for their ‘famous’ behavior, and then she says that the kid should have gotten special treatment for it? Yeah, like that’s not taking advantage of the public exposure, right? Plus, it’s unbelievable that she thinks that if someone has ‘money’ and ‘famous parents’, they are somehow exempt from the law. This is what’s wrong with society these days – all these people who have some semblance of fame or money or power think that they deserve special treatment.

Cameron Douglas screwed up, and now he’s paying the price. Seriously, Diandra herself comes off as a massive money-grubbing attention-seeker, even if she doesn’t sell her pictures to magazines. She was reportedly after half of Michael’s salary for Wall Street 2, but she stopped after finding out that he was ill. But I bet you that if she was famous and people actually cared about her, she would be selling her pictures to magazines, just like the people that she’s criticizing.