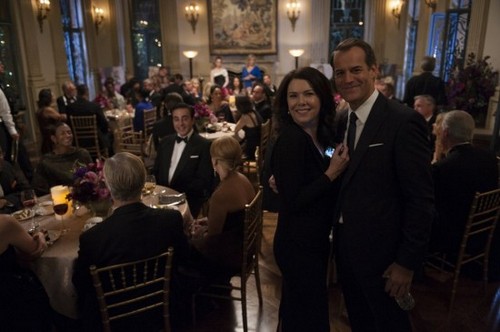 Tonight, the hit show Parenthood airs on NBC with its 11th episode of season 6. The episode is titled “Promises” and on the show tonight Carl attends a fundraiser with Sarah.  If you missed last episode before the winter hiatus, CLICK HERE for a full recap.

On the last episode before the winter hiatus, Amber (Mae Whitman) addressed Ryan (Matt Lauria) about his issues with her hanging out with the band and struggled on whether or not to lean on Sarah (Lauren Graham) for support. Drew (Miles Heizer) asked his uncle Crosby (Dax Shepard) for advice on girls. Meanwhile, Julia (Erika Christensen) and Joel (Sam Jaeger) put their best foot forward for their family’s sake and Adam (Peter Krause) showed his support for his wife Kristina (Monica Potter).

On tonight’s episode, Julia gets confronted by Ed and Joel steps in. Zeek makes a new friend while Camille is away. Drew remembers old feelings and Natalie gets jealous. Carl attends a fundraiser with Sarah and she is pleasantly surprised to learn more about him.

On tonight’s show, people are finding out the old saying “be careful what you wish for” really is true. Natalie thought she could continue to crash in on Drew anytime she felt like it and was surprised to see Amy in his room already.  Don’t know why seeing as she’s the one that insisted going back to being friends.

Speaking of boundaries, Sarah told Carl that she wasn’t going to sleep with again. She didn’t think she had to add the other part. As in she was going to ignore him as long as possible figuring that was implied in the not sleeping together part. Well, he isn’t interested in that when he rings the bell to her apartment. He needs a plus one for work. She’ll be doing him a favor and in return he’ll hook her up with his buddy in advertisement. She could get contract out of that so she agrees to be his “date”.

Later when she’s looking for something to wear, she asks for Jasmine’s help. They were just going through outfits when Jasmine suddenly became curious about Sarah’s date. She looked him up on the internet despite Sarah asking her not to. Sarah feels like those things were a bit too stalkery. Anyway Jasmine found something interesting. Carl it appears is a doctor that runs a large non-profit seeking to help families in third world countries. Sarah may have denied Carl was her date before but can she say the same after learning about his prestigious history.

Meanwhile Hank had to re-shoot his spread for his client but this lead to him letting down Max. Max was promised his film was going to get developed and he couldn’t take the excuses Hank was giving him. He flipped out in the studio and began to yell. He threw a couple of things before fleeing back home. Hank ran after him and when Max’s parents wondered what was wrong he explained to them what had occurred.  They reassured him that Max has been going through things lately and not to worry. They’ll handle Max.

Adam stops by Hank’s afterwards to apologize. He wanted to make sure Max was ok to come back and Hank said it wasn’t a problem. Although Adam’s day isn’t quite over. He gets a visit from Julia. She needed someone to talk to about Ed. He keeps trying to talk to her after the “kiss”. Julia feels bad though because she kissed him back. She’s unsure of her feelings when Adam tells her that she needs to focus on her family. Simply tell Ed to stay away. To make sure Ed really does get the picture, Adam gets Crosby to keep an eye out. He filled him on what’s been going on with Julia and he made Crosby promise to keep Ed away from her when they’re at school. There’s an upcoming function for the parents.

Poor Zeek. Without his wife, his life has slowly been falling apart. Yet he doesn’t tell Camille any of this when she skypes him. Her life has been going well on the other hand. So much so that she’s extending her stay after getting an invite to someone’s villa. She wanted to know if Zeek would be ok with that and he said sure. How could he say anything else after hearing how happy she was? No, he chooses to hang out in diners with the rest of the old people.

Adam had dropped off a book on autism for Hank. He thought it would help Hank to understand Max better when it ended up having a completely different effect. Hank believes after reading the book that he’s undiagnosed autistic. He goes to Sarah saying this explains so much of his life. Why his relationships don’t work out and it even explains why he likes Max. Sarah is trying to reassure him that even if he is autistic then he’s in the high functioning range.  Yet all he’s thinking about was how so many things seem to fly right over his head. Take for instance, Sarah’s appearance. It wasn’t until her date was within seconds from the door that he realized she was dressed for a date.

Sarah goes on the date where she finds out Carl is receiving an award for his humanitarianism. She can’t help but to act like the proud girlfriend by taking his picture and telling him that yes the award is a big deal. They return to their apartment with no funny business although Sarah looks like she might regret the last part.

Natalie has been hanging out with Drew and Amy. At times she intentionally throws herself at Drew so that Amy could get the picture. Drew however tells Amy that nothing is going on between him and Natalie. It clears the way for her staying the night with him. After all she did drink and probably shouldn’t drive.

The morning after, Amy runs into Natalie in the stalls. Natalie knows Amy spent the night and could probably guess the correct reason on why. Wait until she learns that Amy wants to spend more time around campus. She wants Drew back and for more than a weekend.

The silent auction for the parents turns into an issue. Crosby didn’t do his job well enough. A very drunk Ed got close to Julia and refused to leave her alone.  Joel saw her trying to escape and confronted Ed. When words wouldn’t do; Joel moved on to hitting Ed. Crosby was able to help Ed of the floor to avoid a larger scene but his timing should have been quicker.

Joel asks Julia if she’s having an affair. He can’t understand why Ed would react that way unless there was something between him and Julia. She tells him no but he can’ and/or won’t believe her.

Max returns the book back to the Bravermans and while he’s there he wanted to speak with Max. It doesn’t take long for them to go back to being friends. He knows how to get Max talking now.

Zeek’s new dinner friend helped him realize he should have went to Italy with Camille and yet when the time came he couldn’t tell his wife he regretted not going with her.