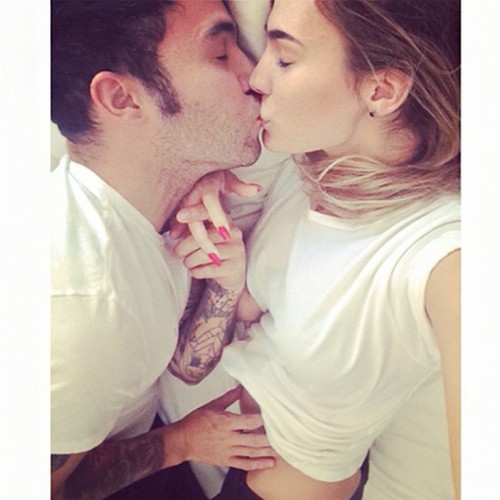 Pete Wentz is about to make his 5-year old son Bronx a big brother. On the heels of Ashlee Simpson announcing her engagement to Evan Ross, Wentz and girlfriend Meagan Camper have announced via Twitter that they are with baby. The couple, together since 2011, dodged break-up rumors shortly after they began when Meagan was spotted house hunting, and the couple was back to blissfully displaying their love in December during outings with Pete’s son Bronx from his marriage to Ashlee Simpson.

In January, the rocker, 34, began dropping hints about wanting to marry Meagan. Well, it seems in their case, it may be carriage before marriage unless Pete gets going and finally makes Meagan his wife. The couple posted an intimate photo of themselves laying down on a bed, holding hands, kissing, with Pete’s hand gently placed on Meagan’s belly.

Wentz wrote, “We’re super excited to announce we’re expecting a baby!” Camper, 23, meanwhile, posted the same pic with the simple caption, “Baby!” It was reported in 2012 that Meagan had been pregnant but suffered a miscarriage in December 2011. In a February 2012 interview with Star magazine, Meagan’s grandmother Sherrilyn Camper confirmed the couple were expecting a baby but had miscarried. She told Star that Wentz “abandoned her right off the bat” when discussing how heartless Pete was for not being there for Meagan after the couple’s loss.

Let’s hope this couple is back on track for the sake of their baby. My guess is Meagan’s grandmother won’t be getting an inside information about their upcoming arrival.