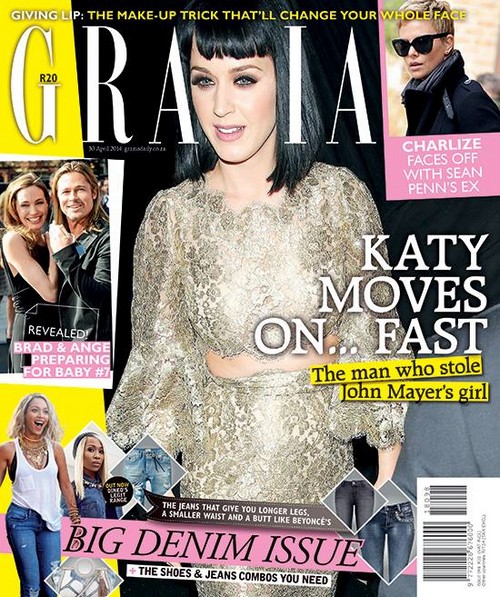 Katy Perry‘s love life has always been at the center of the gossip world, but it’s kicked into high gear after her breakup with John Mayer. The rumor mill has been trying to make Katy and Robert Pattinson happen for a while now, and it looks like their dreams are finally coming true. According to several new reports, Katy and Rob have been secretly hooking up for the past few months, ever since Katy broke up with John and Rob broke up with his on-again/off-again fling Dylan Penn.

The new cover issue of Grazia Magazine focuses on how Katy has moved on so quickly, but is it that hard to believe? She and John dated for a long time, but it didn’t take her that long to jump into John’s arms after her divorce from Russell Brand. Not only that, but she and Rob have known each other for so long and they were reportedly friends with benefits before he even met Kristen Stewart.

Of course, it was hard enough for Kristen to see Rob with Riley Keough and Dylan Penn, but probably ten times more difficult to see him with Katy Perry. Katy used to be Kristen’s friend as well, but it looks like Rob got Katy in the informal separation agreement. Not only did Kristen lose a friend, but she also has to watch that friend dallying with her ex-boyfriend – who she still loves, mind you. Sources have been adamant that Kristen still wants to get back together with Rob and hasn’t gotten over him, but unfortunately for her, the feeling is clearly not mutual.

Grazia’s cover also focuses on how Brad Pitt and Angelina Jolie are preparing for Baby #7, and how Charlize Theron is apparently getting ready to face off against Sean Penn‘s ex-girlfriend.