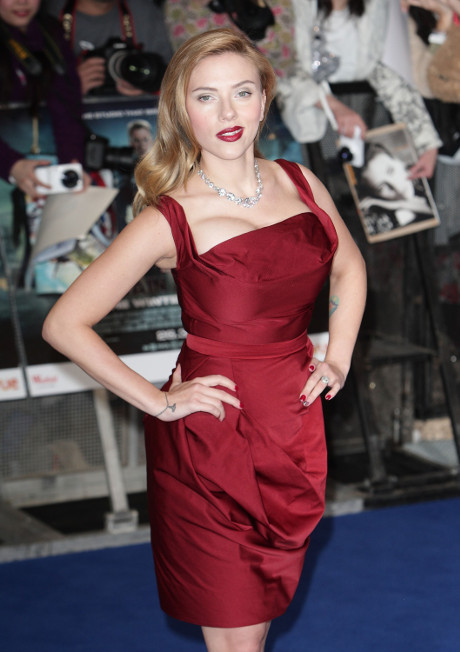 Scarlett Johansson has a baby on the way! The actress stunned in a crimson dress at the UK premiere of Captain America: The Winter Soldier — and she wasn’t shy at all about showing off her glowing baby bump. The layered satin dress kept her bump somewhat contained, but as soon as the actress turned to the side, well, her pregnancy showed. ScarJo is currently engaged to Romain Dauriac.

As we’ve reported in the past, Johansson, 29, became engaged to Dauriac, a French journalist, in September 2013. They dated for about a year before deciding to take things one step further. There are no wedding plans as of yet; therefore, it doesn’t seem as if the A-list actress is in too big of a hurry to make her jaunt down the aisle. She was previously married to Ryan Reynolds. They divorced after three years of marriage. So, I suppose it makes sense that she’s taking things slow.

In Captain America: The Winter Soldier, “Steve Rogers struggles to embrace his role in the modern world and battles a new threat from old history: the Soviet agent known as the Winter Soldier.” Scarlett reprises her role as Natasha Romanoff AKA “Black Widow.”

Take a look at the red carpet photos below and let us know what you think of Scarlett Johansson’s baby bump!