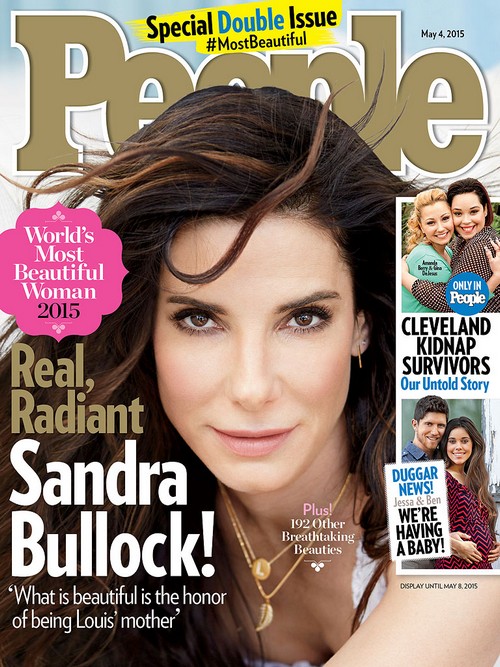 Sandra Bullock was named People Magazine’s ‘Most Beautiful’ Women of 2015, which is obviously an arbitrary title but usually goes to an actress who’s had the most varied and interesting year. However, a new report claims that Sandra Bullock was NOT first choice for the title. Apparently, People Magazine first reached out to Angelina Jolie to see if she would take the ‘honor’, but she refused.

A source tells Naughty Gossip, “Angelina has had an incredible year and hasn’t done a big sit down interview since she announced her new medical news. Sandra is beautiful and the cover will be a huge hit, but she doesn’t have the emotional story that Angie has just revealed. Editors begged for her to do the cover but she passed.”

Honestly, I think both Angelina Jolie and Brad Pitt have moved past People Magazine. They used to cater to the magazine when it was considered top-tier tabloid reporting, but Angelina now has access to Time Magazine and The New York Times – why would she accept People’s Most Beautiful title? She has absolutely nothing to gain from it! Everybody who would pick up the Most Beautiful issue already knows about Angelina Jolie’s medical decisions… Plus, sources say that Angelina Jolie didn’t feel like she had anything to add to her story right now, and she felt that taking the title would take away the spotlight from someone more deserving. And I mean, while I appreciate that People is trying to change up the status quo by giving the title to someone over the age of 40, Sandra Bullock didn’t really do much in 2014…

What do you guys think about Angelina Jolie passing on People Magazine’s ‘Most Beautiful’ honor? Do you think Sandra Bullock ‘deserved’ the title or not? Let us know your thoughts in the comments below.