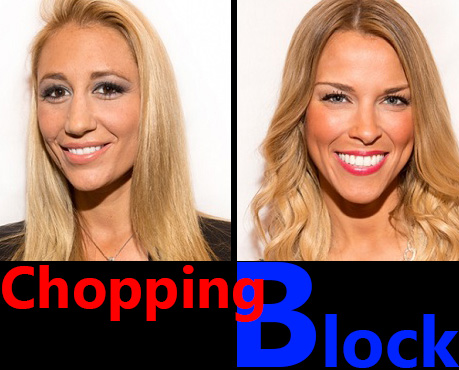 Big Brother 17 spoilers from the CBS live feeds tease that Vanessa Rousso and Shelli Poole are currently sitting on the chopping block, and one of them will be evicted on Thursday, August 14. The “Goblin Alliance” – comprised of Jackie, James, and Meg – were thrilled to have orchestrated a major power move: Operation backdoor Vanessa. Now that she is up on the chopping block, spoilers tease that they have decided they now want to keep Vanessa and evict Shelli instead?! No, that’s not a typo.

It seems like we might get to see the smartest and dumbest moves in Big Brother 17 – all in one week. When Becky put up Vanessa as a renom, the “Goblin Alliance” was victorious. Together they had pulled off a major power play. But spoilers from the live feeds tease that Jackie, James, and Meg spent the entire day convincing each other that they should keep Vanessa and send home Shelli because, apparently, Shelli is a bigger threat. Seriously? Have they been living in the same BB17 house that we have been watching on the live feeds. When did Shelli become more dangerous than Vanessa?

Big Brother season 17 spoilers from the live feeds tease that there was a bit of drama in the house, and Shelli got upset because James still had some of Clay’s clothes – and she apparently wanted them. This awkward moment convinced James that Shelli is still upset about them voting out Clay, and he is certain that if she stays in the house she is coming after the Goblins to avenge her showmance partner’s eviction. Their second and only semi-logical reasoning to evict Shelli is because she is a strong player and has won two HOH competitions. Apparently, they seem to have forgotten that Vanessa won two as well.

What do you guys think? Have the Goblins lost their minds? Is saving Vanessa Rousso the dumbest move ever? Will they actually go through with it and evict Shelli? Let us know what you think in the comments below and don’t forget to check CDL for all of your Big Brother spoilers and recaps.