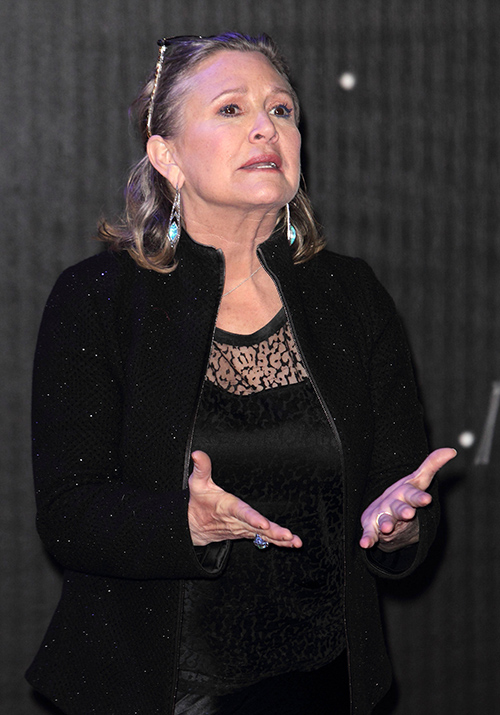 Carrie Fisher is furious with “Star Wars” fans. Princess Leia blames years of drug and alcohol addiction on the trilogy. The actress is also fuming because producers of “Star Wars: The Force Awakens” forced Carrie to lose 35 pounds before filming began.

Insiders reveal Carrie feels that portraying Princess Leia destroyed her career even though the role made the actress a Hollywood icon. According to a report by GLOBE, Fisher will hate Princess Leia until her dying breath.

When Carrie was cast as Princess Leia at 19-years-old Fisher was just over 5-feet tall and weighed 105 pounds. TPTB felt Fisher was “too fat” and demanded Carrie lose 10 pounds before filming of the original “Star Wars” began.

The continued pressure to remain ridiculously slender throughout the 1980s was too much for the young actress – Fisher began using cocaine on the set of “The Empire Strikes Back.” According to Carrie that’s when the years of drug and alcohol abuse and emotional issues began.

At one point during Carrie Fisher’s career, the “When Harry Met Sally” star’s highest weight was 180 pounds. Despite blaming fans’ high expectations that Princess Leia remain youthful, beautiful and slender, Carrie made the decision to appear in “Star Wars: The Force Awakens.” Producers immediately demanded the actress and author lose 35 pounds. Close friends were shocked when Fisher agreed to appear in the blockbuster according to GLOBE.

Fisher continues to complain about working in an “industry where the only things that matters [are] weight and appearance.” Carrie has carved out a very successful career post-Princess Leia as a best-selling author and one of the best Hollywood scriptwriters. In spite of all Carrie’s off-screen success, “Star Wars” enthusiasts only see Fisher as Jabba the Hutt’s sexy young plaything in a gold bikini.

“Star Wars: The Force Awakens” has stirred up many painful memories for Carrie Fisher a source reveals. Carrie spent years getting sober and learning to love herself no matter what her weight. The newest installment in the “Star Wars” franchise has become a painful reminder that the fans will never view Fisher as anything but Princess Leia.