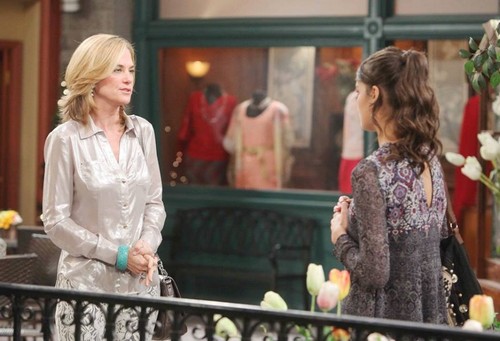 “Days of Our Lives” spoilers for Wednesday, April 15, tease that Melanie (Molly Burnett) is about to drop a huge bombshell on Brady (Eric Martsolf). Melanie had the plasma tested and her suspicions were confirmed about Theresa’s (Jen Lilley) pregnancy. Now Melanie will have to give Brady the shocking news that his child was stolen. It won’t take long for Brady to realize that Kristen (Eileen Davidson) was behind this all along. DOOL characters aren’t always the sharpest tools in the shed, but it’s pretty easy to see that Kristen is the only one crazy enough to pull a stunt like this.

Meanwhile, Kristen will be busy plotting the next phase of her plan. Word has it that Kristen has been hiding out in Italy since she snatched Theresa’s embryo. Kristen gave birth to little Christopher and Dr. Mandrake (Sal Landi) is doing everything in his power to make sure the baby stays healthy and happy. Unfortunately, it looks like they’ll need Theresa’s help to make that happen.

There’s no immediate crisis for Christopher, but Kristen isn’t going to take any chances. Kristen will order Clint (Lucas Kerr) to return to Salem and bring Theresa to her immediately. Poor Theresa has already been on an emotional roller coaster and it doesn’t look like she’s going to get off anytime soon. “Days” fans may be surprised by everything that Kristen has planned. Stay tuned to “Days of Our Lives” to see how Theresa will react when she gets updates on Kristen’s scheme.

Other “Days of Our Lives” spoilers tease that JJ (Casey Moss) will confront Eve (Kassie DePaiva) about the jacket Paige (True O’Brien) found in her apartment. JJ will probably want to know why Eve would make such a risky move. Paige remembers seeing that coat the night JJ and Eve first made love. The more Paige sees it, the more likely it becomes that she’ll learn the truth. The rumors say that jacket will eventually lead to JJ and Eve’s downfall. Stick with DOOL to see how long it takes for Paige to put it all together.

So “Days” fans, what do you think about Melanie’s news for Brady? Will Brady be shocked that Kristen would stoop so low or will he recognize that Kristen is capable of anything? What about JJ’s confrontation with Eve? Did Eve steal the jacket because she still longs to be with JJ on some level? Let us know what you think in the comments below and don’t forget to check CDL tomorrow for the latest “Days of Our Lives” spoilers, rumors, updates and news.