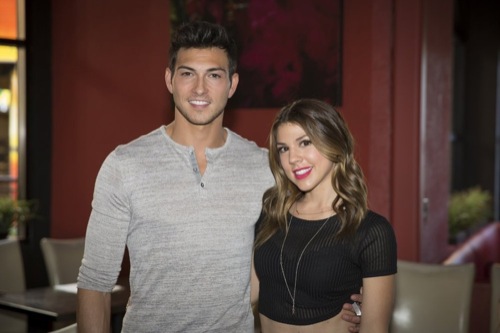 “Days of Our Lives” spoilers suggest that jealousy will play a strong role in Salem in the coming weeks. Recent “DOOL” spoilers tease that mysterious, new Clint (Lucas Kerr) will grow closer to Theresa (Jen Lilley) and their budding relationship may not sit well with Brady (Eric Martsolf). While Brady has been busy trying to keep his new romance with Melanie (Molly Burnett) under wraps, it looks like he’ll find time to do a bit of prying. That interest could prove to be more than just curiosity. As much as Brady doesn’t want to admit it, his feelings for Theresa may not be gone for good.

The “green-eyed monster” may rear its ugly head among other “Days of Our Lives” characters in upcoming scenes. “DOOL” fans won’t want to miss a minute as Rafe (Galen Gering) tries to reconnect with Jordan (Chrishell Stause) and Chad (Billy Flynn) makes his displeasure known.

“Days” spoilers indicate Abigail’s (Kate Mansi) name could also get dragged through the mud and Ben (Robert Scott Wilson) will have no choice but to step in. He’ll likely have trouble keeping his anger in check. When the punches start to fly, Ben will pay a big price for his conduct. His wild fists may cost him a fistful of dollars in bail money after he’s arrested. “Days of Our Lives” viewers will definitely want to see where this storyline goes.

So “Days” fans, what do think about the jealousy that seems to be running rampant through Salem? Would you support a Brady and Theresa pairing once again? Who are you rooting for in the Rafe-Chad-Jordan love triangle? Are you team Rafe or team Chad? How do you feel about Abigail and Ben being caught in the middle of it all? Speak your mind and discuss what you’re on board with in the comments below. Keep watching as the story unfolds and don’t forget to check CDL often for all the latest “Days of Our Lives” spoilers and news.