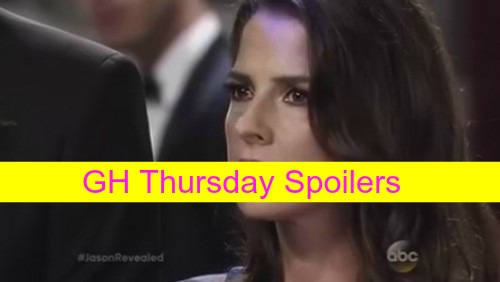 Check out these “General Hospital” (GH) spoilers for the Thursday, November 5 show. Last-minute wedding preparations are underway, Carly is in peril, and the lawyers are gearing up for the custody fight that’s going down next week. Here’s what you need to know about tomorrow’s show…

First, Carly Corinthos (Laura Wright) is in danger but at least she was able to get her cell phone and make a call to Jake Doe (Billy Miller). Of course, she has reception issues and isn’t able to let Jake know she was in a wreck, is injured, and knows who he really is.

Their call will cut out and then Carly will do a clumsy move and trip over a branch and knock herself out again. How many times has she fallen down stairs, wrecked cars and been in ridiculous danger?

It’s up to Jake now to find Carly since he knows she’s not anywhere that she should be. Sam Morgan (Kelly Monaco) runs into Jake at GH and asks him what’s going on. Will Sam lend a hand in the search for Carly?

And if the hunt for Carly has Jake and Sam late to the church, will this set Liz Webber (Rebecca Herbst) off with stress? Carly’s car looks like it went deep off the road, can anyone even see it there? And will Kiki Jerome (Hayley Erin) confess her misdeed in time to help with the rescue? Nah.

For now, Liz is oblivious to the drama headed her way as her nurse friends are at her house helping her get ready. Michael Quartermaine (Chad Duell) stops by to check on Sabrina Santiago (Teresa Castillo).

What Sonny Corinthos (Maurice Benard) said has Michael thinking about why Sabrina turned him down and what Liz said about Jake being so great with her boys has Sabrina thinking about the proposal. She’ll wonder if it’s a right to marry Michael and if she should tell him the truth about Carlos first.

Nikolas Cassadine (Tyler Christopher) is dealing with two possible loose cannons out at Wyndemere – Hayden Barnes (Rebecca Budig) and Laura Spencer (Genie Francis). Nikolas is worried that Hayden may act out at the wedding and try and embarrass Liz.

Hayden will promise to be on her best behavior but Nikolas isn’t certain she can be trusted. But no worries, Hayden plans to make quieter mischief at the wedding and it won’t be a scene – just a confrontation.

Nikolas also has to deal with his mother who is not happy that he and Liz are going to let Jason get married without knowing his true identity and that he’s already got a wife. Nikolas will remind his mother that if she blabs, he will very likely go to jail.

He may also throw some of her own past shady actions back at her. Laura will go away for now, but you can’t count her out – Laura may show up to the church to try and stop the proceedings.

Both are intent on gaining sole custody and screwing the other parent out of any time with their little girl. It just shows what both of them are made of – mean stuff to the core. Both will have meetings on Thursday with their respective lawyers.

Scotty Baldwin (Kin Shriner) is not confident of their chances at gaining sole custody and will encourage Ava to play nice and cut a deal with Sonny. Ric Lansing (Rick Hearst), though, is puffed up with confidence and assures Sonny that he’s got a shady plan to shut Ava’s custody attempt down.

Too bad that nothing Ric ever does that works out according to his plans. Whatever he’s done will set Ava off and she will go off on Sonny about what he and his lawyer are cooking up.

All this and more on Thursday’s show – don’t miss a moment then check back with CDL for detailed “General Hospital” spoilers on Friday’s big Jake reveal and cliffhanger show!